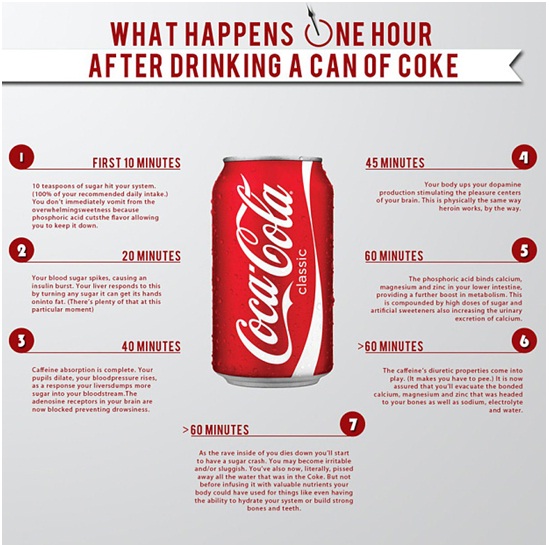 We all know fizzy drinks like Coca Cola are loaded with sugar, but do you really know what happens to your body when you glug a can of the sweet stuff? Few days back following information went viral. Please do read this article to educate yourself about Coca Cola.

Ten tea spoons of sugar contained in a glass of Cola, cause devastating “strike” on the organism and the only cause, by reason of not vomiting, is the phosphoric acid which inhibits the action of sugar.

A leap of insulin levels in bloodstream occurs. The liver converts all the sugar into fat.

Ingestion of caffeine is finally completed. The eye pupils are expanding. Blood pressure rises, because the liver disposes more sugar into bloodstream. The adenosine receptors get blocked, thereby preventing drowsiness.

Body raises production of dopamine hormone, which stimulates the brain pleasure center. Heroin has the same principle of operation.

After more than 1 hour

Diuretic effect of the drink enters in “the game”. The calcium, magnesium and zinc are removed out of the organism, which are a part of our bones, as well as sodium. At this time we have already become irritable or subdued. The whole quantity of water, contained in a coca cola, is removed by the urine.

Actually, when having a cold bottle of Coke and enjoying its undeniable freshness, do we know what chemical “cocktail” we pour into our throats?

The active ingredient of Coca-Cola is orthophosphoric acid. Due to its high acidity, cisterns used for transporting of the concentrate have to be equipped with special reservoirs designed for highly corrosive materials.

Aqua Carbonated – this is sparkling water. It stirs gastric secretion, increases the acidity of the gastric juice and provokes flatulency – plenty evolution of gases. Furthermore, spring water is not used, but is used regular filtered water.

E150D – food coloring, obtained through the processing of sugar at specified temperatures, with or without addition of chemical reagents. In the case with coca-cola, ammonium sulfate is added.

E952 – Sodium Cyclamate is a sugar substitute. Cyclamate is a synthetic chemical, has sweet taste, which is 200 times sweeter than sugar, and is used as an artificial sweetener. In 1969 it was banned by FDA, since it as well as saccharin and aspartame, caused cancer in rats’ urinary bladder. In 1975, prohibition seized also Japan, South Korea and Singapore. In 1979, WHO (World Health Organization), “who knows why?” rehabilitated cyclamates and recognizing them as safe.

E950 – Acesulfame Potassium. 200 times sweeter than sugar, containing methyl ether, where it aggravates the operation of the cardiovascular system. Likewise, it contains asparaginic acid which can also cause excitant effect on our nervous system and in time it can lead to addiction. Acesulfame is badly dissolved and is not recommended for use by children and pregnant women.

E330 – Citric Acid. It is widely spread in nature and is used in pharmaceutical and food industries. Salts of citric acid (citrates) are used in food industry as acids, preservatives, stabilizers, and in medical fields – for preserving blood.

E211 – Sodium Benzoate. It is used in production of some food products, as an anti-bacterial and anti-fungal agent. These products refer to jams, fruit juices and fruit yoghurts. It’s not recommended for use by asthmatics and people who are sensitive to aspirin. A study conducted by Peter Piper at the Sheffield University in Britain, found that this compound causes significant damage to DNA. According to his words, sodium benzoate which is an active component in preservatives doesn’t destroy DNA, but deactivating it. This can lead to cirrhosis and degenerative diseases like Parkinson’s disease.

So, what turns out? Well, it turns out that “the secret recipe” of coca-cola is just one advertising play. What kind of secret may be there, when it’s well known to us that this is a weak solution of cocaine with preservatives, colorants, stabilizers and etc. I.e., this is legalized cocaine addiction plus pure poison. Diet Coke is even worse, because the aspartame in it, replaces sugar, becoming pure neurotoxic poison

So, if you can’t imagine a life without coca-cola, take advantage of the following recommendations