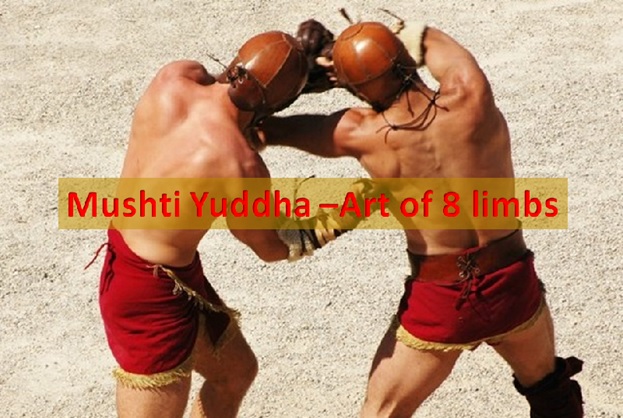 In Varanasi, Musti-yuddha  was not a sport, but a way to  fight with the anti-social elements. Similar to Southeast Asian kickboxing styles it makes use of punches, kicks, knees and elbow strikes & head buttes although punches tend to dominate.

Matches were once held regularly in Varanasi but were eventually banned because of the fights which often broke out among the boxers’ supporters. Illegal bouts continued but became rare by the 1960s.

The additional thing which needs to meant here is that the training of Musti-yuddha  is a spiritual training, as well as  physical  workout. Traditionally, the art of hand to hand combat in India was divided into two main categories: Musti-yuddha  and Malla yuddha.

Sanskrit, mallayuddha  literally translates to “boxing match”.  Strictly speaking, the term denotes a single pugilistic encounter or prize-fight rather than a style or school of wrestling.

This art was known as the “art of eight limbs” as there are eight natural weapons to fight with: fists, elbows, knees and feet.

Technique used in this ancient martial art are punches, kicks, knees and elbow strikes. This style is a complete art of physical, mental and spiritual development.