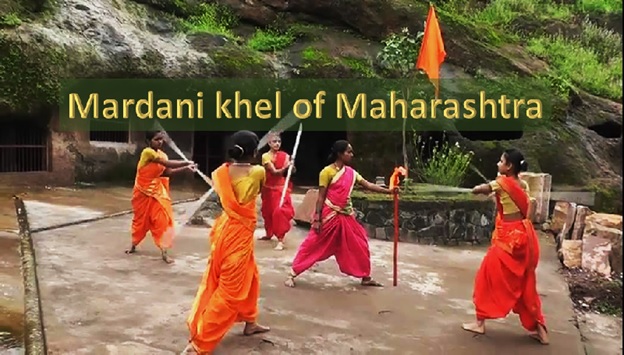 Mardani Khel is an armed method of martial art created by the Maratha. This traditional martial art of Maharashtra is practiced in kolhapur.

This martial art is considered to be a manly sport, which traces its history to Maratha warriors, includes 14 ways to wield a sword, sticks and other weapons. Like all good martial arts, it also teaches you the weaknesses of the human anatomy in attack mode.

The Kolhapur civic body started a program to train girls and women in this art for self-defense.

The use of weapons such as swords, katyar (dagger), lathi-kathi (bamboo sticks), veeta (darts), bhala (javelin) and dand and patta (long-bladed swords) continued but the moves were made more stylish and less lethal. The popularity of this defense art is increasing.

Pari-Khanda: “Armour & Sword“ It is style of sword and shield fighting from the state of Bihar. This art is created by the Rajput. Pari-khanda steps and techniques were used by villagers to defend their village and birth place. These moves are also used in traditional Chau dance.

Kathi Samu: “Sword fight” is very old Indian martial art originated in Andhra Pradesh and was used by mastered of the royal armies of Andhra Pradesh. The martial art is also known as Sword Fight or Daal Fariya. The swords used for Kathi samu are of various types. Besides the long, curved sword, they also use a Limcha, used in the wars earlier, and Pata, a sword with a wooden cover.

Both Pari-Khanda and Kathi Samu – teaches self defense skills, attention to surroundings, good attitude and helps in building muscle strength and healthy movement of the body.