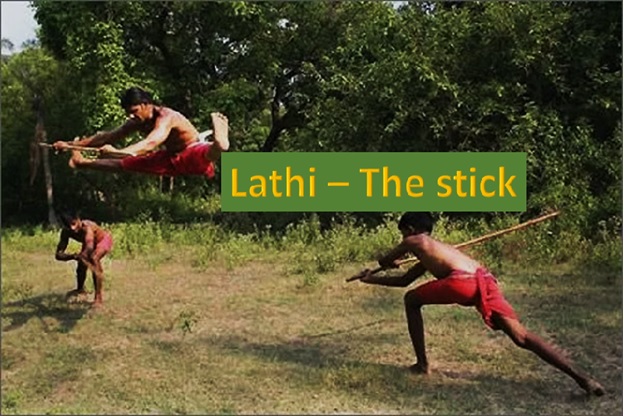 Lathi or stick martial arts practiced in Punjab and Bengal region of India. Lathi still remains a popular sport in Indian villages.  Lahti is actually a 2-5 foot stick usually made out of bamboo. This long bamboo weapon is often combined with a shield.

Other weapons such as the sword and knife are occasionally used by Lathi Khela students. A practitioner is known as a lathial.

It is a fitness regime for many villagers in North East India. They also perform various acts like Baoi Jhak (group fight), Nori Bari (mock fight with sticks), Fala Khela and Dao Khela (mock fight with sharp weapons) and Chhuri dance to music, in the presence of hundreds.

These groups may also learn the arts of dao khela (knife fighting) and fara khela (sword fighting), both of which are preserved today in the form of mock-fights.

In lathi the center of energy is the heart chakra, and practitioners fight in a more upright position. It helps mind to focus, strengthens muscles and shoulder. Quick action helps in achieving active movement of the body.

Do you know? Rich farmers and other eminent people hire lathial for security and as a symbol of their power. The Lathi is used mainly for crowd control.. It is also known for the infamous “Lathi Charge” where policemen charge as a group while swinging Lathi in order to disperse protesters, etc.