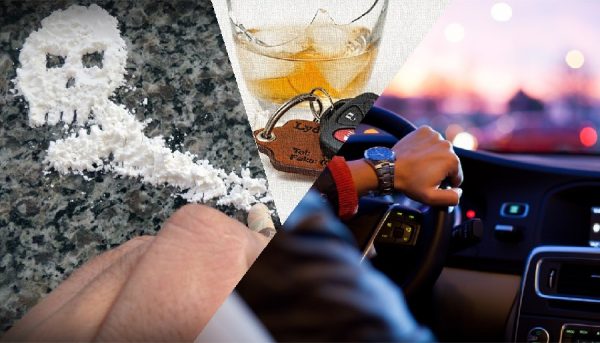 We all know that drunken driving is dangerous and like wise consumption of pot or illicit drugs also dangerous for life. A new research study shows that mixing alcohol to pot and driving after the consumption of the mix makes matter worse.

Alcohol consumption alone typically makes driver lose sense and end up in losing track or might crash. If the person has higher level of blood alcohol, one could expect worse in driving. Use of such illicit drugs and/ or misuse of prescription drugs make driving a vehicle unsafe. Drugged driving puts not just driver, also passengers, other vehicles on road and others who share roads at risk too.

It is also known fact that consumption of marijuana before or while driving will make driver slow down. Slowing does not mean that it is safety. It means person is under influence “high” and will have tough time to focus on lane and just like alcohol drinking and driving, makes it worst for the driver.

What effect drugs will have on brain? Marijuana can slow reaction time, impair judgment of time and distance, and decrease coordination. Drivers who have used cocaine or methamphetamine can be aggressive and reckless when driving. Certain kinds of prescription medicines, including benzodiazepines and opioids, can cause drowsiness, dizziness, and impair cognitive functioning (thinking and judgment). All of these effects can lead to vehicle crashes.

A recent study conducted at University of Calgary, Alberta, Canada revealed that the combination of alcohol and marijuana diminishes driving skill even more than the drug or alcohol alone.

It is important to understand why this combination of drug and alcohol has such a huge impact on driving? According to researcher Sarah Simmons, (together Traffic injury Research Foundation in Ottawa, Ontario Canada),  many people drink and use marijuana.

There is a popular notion that consuming pot makes a person better driver because people who are on influence “high” are aware of it and they try to compensate by slowing down or increasing the following distance behind other vehicles. As per data, people did tend to slow driving speed under marijuana influence. Despite slowing, these drivers had hard time with drifting side-to-side.

This study also throws water on another popular notion ‘the opposing effects of marijuana and alcohol on driving speed might ‘cancel each other out’! – The analysis by Simmons showed that there is no evidence for this theory and moreover, it further clarifies that the two substances when combined and taken, will worsen drivers ability to stay in lane and impairs judgment.

Healthy volunteers without substance abuse disorders took part in the study. Their driving skills assessed in simulators or closed courses before and after giving fixed amount of marijuana, alcohol, or both.

The questions that are still open are:

Whether different forms of cannabis – like edibles would have similar effect?

Whether results would be the same in people who use cannabis chronically and heavily?

Pat Aussem, Associate Vice President of consumer clinical content development for the nonprofit Partnership to End Addiction says, “there are many factors to consider when it comes to how cannabis can affect driving”. The active ingredient in cannabis is THC (tetrahydrocannabinol). The potency of this ingredient in cannabis is one. A person’s tolerance depends on the amount of time that has passed since using the drug. And substance becomes high very quick by smoking or vaping the cannabis than consuming it as edibles.

There is a growing number of populations that may be driving with THC in system. One of the reasons could be in Canada (where this study was conducted), cannabis is legalized in 2018 and more drivers injured in crashes are testing positive for the drug since. This number is about 18% when compared to 9% previous year. Similar pattern has been seen in US states where marijuana is legalized. It is important to monitor the drivers and levels of active ingredients.

Responding to the  study, Dr. Nora Volkow, Director of the US National Institute on Drub abuse said that “ It is crucial that we understand the impact of legalization on addiction and range of other health outcomes, including driving accidents.

Author: Sumana Rao | Posted on: February 2, 2022
TAGS: Cannabis influenceDriving under influenceDrug AddictionDrugs and AlcoholDrugs and drunk drivingDrunken drivingHigh on drigsMarijuana influencePrescription drugsUnsafe drivingVehicle crash and drug use
« Previous Article Next Article »
« Gene variant that protects against COVID-19 identified Guduchi Is Safe To Use And Does Not Have Toxic Effects, It Is Misleading To Relate Guduchi To Liver Damage -Ayush »