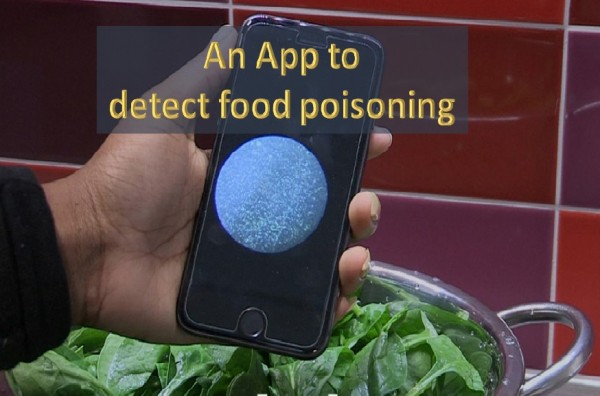 Are you afraid of eating out or traveling because of food poisoning? A new App developed at University of Massachusetts, Amherst by food scientists soon will solve this issue as they have come up with a technique that can help us avoid food poisoning!

What is this technique? Smartphone is the solution. How it is done? By finding presence of bacteria using chips covered with microbes and using smartphone camera! Now, smartphones are becoming more smart and helpful too!

At present, to identify microbes like bacteria that can make us sick, especially the ones’ like E. coli or Salmonella food scientists are using DNA testing. Generally, in the food labs, to find out which bacteria is causing problem scientists to collect the samples from the food like spinach, chicken skin or by rinsing egg etc. They collect small, tiny number of bacteria. These bacterial will be culture 24 hours on Petri dishes to get more colonies. All these tests take time and specialized environment and equipment. Later using DNA testing microbes will be identified. This method is time consuming because it needs more number of bacteria.

In nature a tiny amount of microbe is enough to cause food poisoning and illness. It means the detection need to detect low numbers of bacteria or in micro quantities. Microbiologist Lynne McLandsborough from Massachusetts working with Science professor Lili developed a much simpler technique that is more accessible to detect harmful bacteria in food that we eat.

It is a smartphone app that uses a $30/- microscope attachment!! This device works with a chemically coated chip that binds to bacteria in tiny amounts. For example, the chip will be dipped into contaminated water for half an hour to reveal the bacteria. Chip will be clipped right onto the camera of iPhone or smartphone.

During demonstration of their invention, Adam Salhaney, an undergraduate student pointed the microscope at a gold chip they have coated with Salmonella. Image enlarged showed the number of black dots set against the gold background of the chip and black dots were bacteria. Their hope is that consumers will buy this testing kit for kitchens and use it when they want including to test drinking water during natural disaster. Hope is that the average consumer should be able to figure out without much difficulty whether food is contaminated.

At present the experiment tests are preliminary. However, several food processing companies have contacted the research group after their work published beginning of this year. It will take few more years to get into the market. Reason is, as of now bacterial image can be obtained but to understand whether it is pathogenic or nonpathogenic, harmful or harmless and, to find out exact type of bacteria, scientists need to develop further technique.

There are millions of consumers who use smartphone for various purposes. Eventually using smartphone in the kitchen to help prevent family from eating contaminated food is a possibility. It keeps everyone healthy and smart!