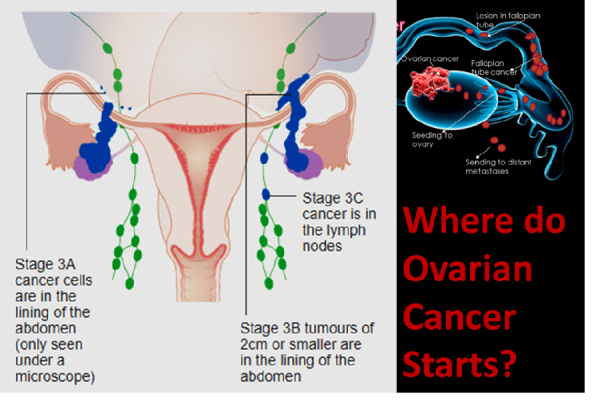 Ovarian cancer is the first leading cause of death in women killing many each year. One of the reason is there is no real way to screen ovarian cancer. It is usually not diagnosed until it has spread and reached later stages.  Nearly, 15 to 20% ovarian cancers are inherited and women who test positive for genetic mutations in BRCA1 and BRCA2 genes have more risk of developing ovarian cancer.

Two studies published in Journal of Nature Communications focused on high grade serous ovarian cancer which is a serious and common type ovarian cancer. Prof. Douglas Levine Director of gynecologic Oncology at the Perimutter Cancer Center at New York University and his coworkers examined the precursor lesion that are an abundance of abnormal cells and genetic profiles of 96 women with ovarian cancer. These were compared with tissues of Fallopian tube, ovaries and the lining inside the abdomen of healthy women. Using the molecular bar technology scientists tried to understand which tissue the cancerous cells were more genetically similar to.

Their finding is that, in almost every case the cancerous cells were similar to the fallopian tube tissue!

Dr. Levine said, “ovarian cancer really comes from the fallopian tube and technically it is fallopian tube cancer even though we are not going to change the name”

For women who carry such genes there is no way to screen for ovarian cancer and doctors usually recommend preventive surgery between ages 35 and 40 (if women do not want to conceive any more). The surgery entails removing both fallopian tubes and ovaries. This causes premature menopause. Experts say getting into menopause 10 to 12 years early can hurt women’s quality of life. As Dr. Karen Lu, senior VP of Anderson Cancer Center at Huston says, “surgical menopause in no walk in the park”. It means women must face drastic decline in estrogen level and it affects their mood, night sweat, hot flash and sex life.

Trials in both USA and the Netherlands are currently going on to see if removing fallopian tubes and delaying removal of ovaries should be considered in women who have BRCA mutations and are at high risk of developing ovarian cancer.

In the second study in nature communications from John Hopkins University school of Medicine co researchers examined the small lesions in Fallopian tube, Fallopian tube tumors, ovarian cancers and metastases from women with high grade serous ovarian cancer. Sequenced genomes revealed that about seven years elapses between development of the early Fallopian tube lesions and ovarian cancer and within a year cancer quickly spread. Dr. Velculescu Oncology professor from John Hopkins said, “if we catch these lesion early, we can intervene before the cancer metastasizes”

Researchers are trying to confirm their findings on larger scale by studying other subtypes of ovarian cancer.

These findings have significant impact on early detection, prevention and therapeutic intervention of ovarian cancer.