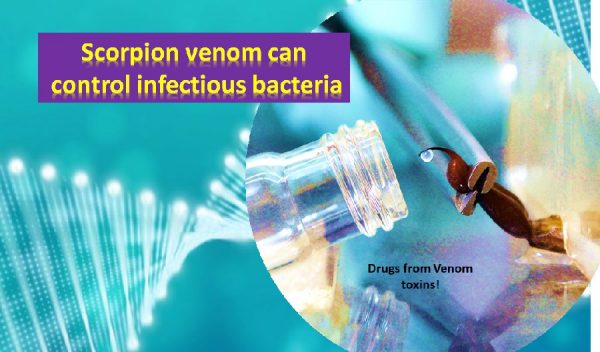 Many animals contain venom that can be poisonous to predators. Venom of animals is one of the nature’s great paradoxes as it is designed to kill but at the same time properties of venom can be used to cure human conditions. Venom of some animals produce mild irritation and discourage predators.  On the other hand, there are animals whose venom can easily kill an adult human within few minutes. The most heard venoms are of wasps, spiders, snails, snakes – cobra, viper, king cobra scorpion, octopus, frogs and fishes.

In recent years researchers attracted to chemotherapeutic properties of various animal venoms. So far nearly 1000 types of venom toxins have been analyzed by scientists. Scientists use animal venoms to cure and control certain human diseases. Venoms of cobra, king cobra, viper and frogs are used in several experiments to cure human conditions.

A study in 2017 from National Taiwan University in Taipei showed the protein derived from the venom of Tropidolaemus wagleri, which is a snake effectively reduced blood clots in lab mice without causing the side effect such as any excessive bleeding.

A recent collaborative study by scientists of National Autonomous university of Mexico, Mexico city and Stanford University California made a discovery which is highly promising. Venom of a scorpion species ( Diplocentrus melici, Native to Eastern Mexico) was tested on mice and tissue samples for infectious bacteria. Compound present in the venom can fight off infectious bacteria without causing any harm to healthy tissue.

The compound 1,4 Benzoquinone derived from the venom of this scorpion acts as an antimicrobial agent against Staphylococcus aureus and Mycobacteriaum tuberculosis. This compound which is extracted from scorpion are two 1,4-benzoquinone compounds appear in red and blue. Both benzoquinones showed remarkable antimicrobial activities on two types of bacteria.

As of today, only few drugs derived from animal venoms are approved (by FDA) and rest are under clinical trials.

Both sea snakes and venomous fishes are not largely explored.

Animal venoms are complex mixtures of proteins and peptides. A single venom may contain up to several hundred different components that cause different physiological effect. Scientists have discovered several venoms that are used in medicines. When venoms are used to make drugs it is the toxin – compound present in the venom are used. Dosages will be monitored and it takes many years from the time a toxin is identified to the time a new drug using that particular toxin tested and  brought to market in the form of a drug.

Today most of the compositions of venom from various species are examined. Genetic studies at molecular level is helping to understand the composition of venoms. These proteomics and genomics studies may help to discover new compounds. All the studies that is going on in drug field and the development of various methods might result in the entry of many new drugs to market as cure to human conditions.