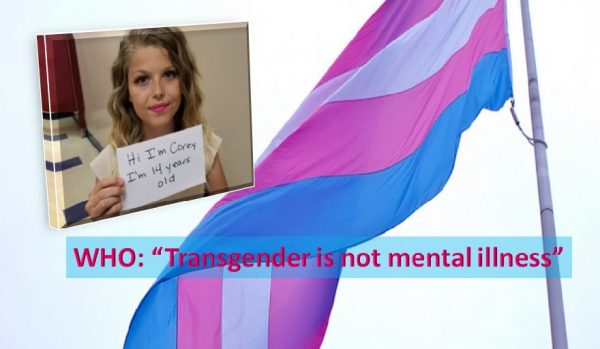 Historically the term transgender was categorized as a mental health condition. But with evolving scientific understanding of gender as well as the tireless attempts and advocacy by transgender activists made World Health Organization to declare transgender is no more a mental illness.

People who identify themselves as transgender or transsexual are those who are born with typical female or male anatomies, but they feel that they have been born into “wrong body”.  Transsexual or transgender means, if a person has male body anatomy and feels like a female and seek help to become a female with help of hormones or electing to have reassignment of sex through surgeries.

According to psychological and medical experts  – that experiencing gender as different from the one assigned in the body during birth is not a disorder or disease rather it is a natural variation of human experience and feeling.

In its global manual of diagnoses (May, 2019) WHO approved this major change and it will benefit transgender people according to Human Rights Watch. This change replaces what was before in the policies regarding transgender.  In the previous manual which was used by Governments around the world, the basis for discriminatory policies required diagnosis and other medical procedures before transgender people can be recognized before the law. The two sets of guidelines to diagnose patients (mental health) are: The diagnostic and Statistical Manual (DSM) by American Psychiatric Association and International classification of Diseases or ICD by WHO.

“It was taken out from mental health disorders because we had a better understanding that this was not actually a mental health condition, and leaving it there was causing stigma,” said Dr. Lale Say, a reproductive health expert with WHO.

WHO’S decision to remove gender identity disorder from its diagnostic manual will give a liberating effect on transgender people worldwide – According to  Graeme Ried, Director at Human Rights Watch.

People including adolescents and adults who seek medical care are no more viewed as “mentally disordered”. The new guidelines of WHO is the 11th revised version of ICD or known as ICD -11. In this guidelines gender identity disorders are re-framed as gender incongruence and moved from the list of mental disorders to sexual health chapter.

This change in medical terms and diagnosis helps those people who are fighting stigma, bullying and discrimination in the system. As per Human Rights Watch “ health professional should be able to provide care for transgender people that is free from discrimination.  The human right issues such as legal recognition should kept separate from medical procedures. If the medical support needed, it should be readily accessible and available for those who are in need.

The change was announced last year and resolution to amend the WHO’s health guidelines was approved this May with the better understanding that it is not a mental illness. Many countries including Nepal, Norway, Malta, Argentina had made progress in legal recognition of transgender people and they no need to have mental diagnoses. Other countries are yet to implement and reform the national medical systems.