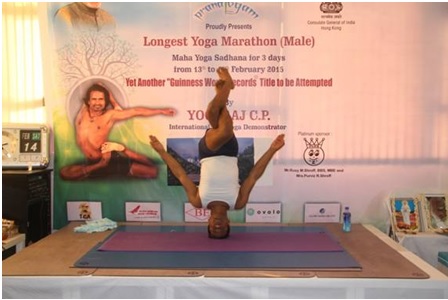 He started the Maha Yoga Sadhana at 1805 hrs on 13th Feb, 2015 and continuously performed Yoga on successive nights of 13th and 14th Feb before achieving the feat on the afternoon of 15th February, 2015.

The yoga instructor did multiple twists and turns at his Tsim Sha Tsui studio, (in Hong Kong) Prana Yogam, which was open to public for the duration of the challenge. “Yoga record. Yogaraj sets record with 40 hours of nonstop Yoga Sadhana in Hong Kong, demonstrating 1500 plus asanas,” External Affairs Ministry Spokesperson Syed Akbaruddin tweeted after Yogaraj accomplished the feat.

Yogaraj C.P., awarded the title “King of Yoga” in 1991 after winning the championship award at the State Yoga Competition in Tamil Nadu, India.

Yogaraj was initiated into Yoga at the age of 5 by his father, S. Chidhambaram, who was an ex-service man from the Indian Military.

He later learned Yoga from Yoga Acharya A. Yesudas Antony, who has studied Yoga in the world renowned International Sivananda Ashram in Kerala, India.

Before attempting the record, Yogaraj had said that if he succeeds, he will dedicate the record to Prime Minister Narendra Modi, who was instrumental last year in the UN’s decision to declare June 21 International Yoga Day. His record-breaking attempt this time was supported primarily by the Indian Consulate.