Reduce Risk of lung diseases | Topic of the Day - HealthyLife 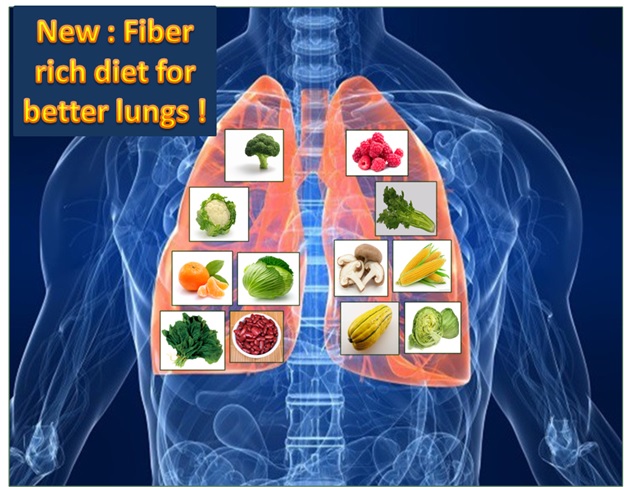 A new research and studies from The American Thoracic Society suggests that a high fiber diet could help to reduce the risk of lung conditions. So far we knew that diabetic and heart patients get much benefit from fiber rich food and now lung patients can also get benefit of fiber rich vegetables and fruits.

The study’s lead author Corrine Hanson, an associate professor of medical nutrition, said: ‘Lung disease is an important public health problem, so it’s important to identify modifiable risk factors for prevention. However, beyond smoking very few preventative strategies have been identified. Increasing fiber intake may be a practical and effective way for people to have an impact on their risk of lung disease.’

Analyzing data from the National Health and Nutrition Examination Surveys (NHANES) researchers report in “The Relationship between Dietary Fiber Intake and Lung Function in NHANES,” that among adults in the top quartile of fiber intake:

In two important breathing tests, those with the highest fiber intake also performed significantly better than those with the lowest intake. Those in the top quartile had a greater lung capacity  and could exhale more air in one second) than those in the lowest quartile. Fiber consumption was calculated based on the amount of fruits, vegetables, legumes and whole grains participants recalled eating. Those whose diets included more than 17.5 grams of fiber a day were in the top quartile and represented the largest number of participants, 571. Those getting less than 10.75 grams of fiber a day were in the lower group and represented the smallest number of participants, 360. Researchers adjusted for a number of demographic and health factors, including smoking, weight and socioeconomic status, and found an independent association between fiber and lung function.

Although the team acknowledged the study’s limitations such as not factoring in physical exercise or analysing fibre consumption and lung function over a longer period, they still concluded that there was a link between low consumption of fibre and a decrease in lung function.

Researchers believe that benefits of fiber on lung function can be explained by results of previous studies.Previous results demonstrated, diet fiber’s ability to reduce inflammation in the body, a factor in many lung diseases, and have shown fiber also has the ability to change the balance of microbes in the gut, which could in turn help to release chemicals into the body, which help to protect the lungs.

How much fiber one should get per day? : Women should get about 25 grams a day and men at least 35 to 40, but the average person gets just 15 grams a day.