The Outbreak of Zika Virus |Topic of the Day - HealthyLife 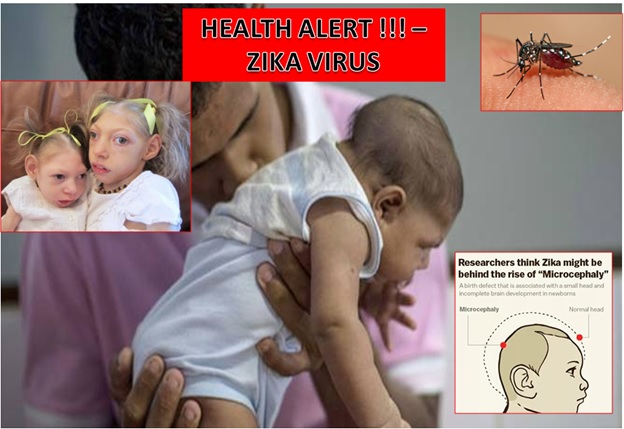 The World Health Organization on Monday (February 1st) declared a International Health emergency over the rapidly spreading Zika virus, saying it is an “extraordinary event” that poses a threat to the rest of the world. The declaration was made after an emergency meeting of independent experts called in response to a spike in babies born with brain defects and abnormally small heads in Brazil since the virus was first found there last year.

Recently a person in Texas has been infected with the Zika virus after having sex with an ill person who had returned from South America. It is the first case of the virus being transmitted in the U.S. during the current outbreak of Zika, which has been linked to birth defects in the Americas. “It’s very rare but this is not new, we always looked at the point that this could be transmitted sexually,” said Zachary Thompson, director of the Dallas County Health and Human Services, told WFAA-TV in Dallas.

Zika virus is an emerging mosquito-borne virus that was first identified in Uganda in 1947 in rhesus monkeys through a monitoring network of sylvatic yellow fever. It was subsequently identified in humans in 1952 in Uganda and the United Republic of Tanzania. Outbreaks of Zika virus disease have been recorded in Africa, the Americas, Asia and the Pacific.

What are the symptoms of Zika ?

The most common symptoms of Zika virus infection are mild fever and exanthema (skin rash), usually accompanied by conjunctivitis, muscle or joint pain, and general malaise that begins 2-7 days after the bite of an infected mosquito.
• About 1 in 5 people infected with Zika virus become ill (i.e., develop Zika).
• The most common symptoms of Zika are fever, rash, joint pain, or conjunctivitis (red eyes). Other common symptoms include muscle pain and headache. The incubation period (the time from exposure to symptoms) for Zika virus disease is not known, but is likely to be a few days to a week.
• The illness is usually mild with symptoms lasting for several days to a week.
• Zika virus usually remains in the blood of an infected person for a few days but it can be found longer in some people.
• Severe disease requiring hospitalization is uncommon.
• Deaths are rare.

How is Zika virus transmitted?

Zika virus is transmitted to people through the bite of an infected Aedes mosquito. This is the same mosquito that transmits dengue and chikungunya. In general, the Zika virus needs a vector (a means of transportation) to infect people. That vector is the mosquito. The virus has also been isolated in semen, and one case of possible person-to-person sexual transmission has been described. Zika can be transmitted through blood, but this is an infrequent mechanism. The usual recommendations for safe transfusions should be followed (e.g., healthy volunteer donors).

Where has Zika virus been found?

• Prior to 2015, Zika virus outbreaks have occurred in areas of Africa, Southeast Asia, and the Pacific Islands.
• In May 2015, the Pan American Health Organization (PAHO) issued an alert regarding the first confirmed Zika virus infections in Brazil.
• Currently, outbreaks are occurring in many countries.
• Zika virus will continue to spread and it will be difficult to determine how the virus will spread over time.

Zika in the United States and its territories:

Zika virus disease is usually relatively mild and requires no specific treatment. People sick with Zika virus should get plenty of rest, drink enough fluids, and treat pain and fever with common medicines. If symptoms worsen, they should seek medical care and advice. There is currently no vaccine available.

• No vaccine or medications are available to prevent or treat Zika infections.
• Get plenty of rest.
• Drink fluids to prevent dehydration.
• Take medicine such as acetaminophen to relieve fever and pain.
• Do not take aspirin and other non-steroidal anti-inflammatory drugs (NSAIDs), like ibuprofen and naproxen. Aspirin and NSAIDs (nonsteroidal anti-inflammatory drug) should be avoided until dengue can be ruled out to reduce the risk of hemorrhage (bleeding). If you are taking medicine for another medical condition, talk to your healthcare provider before taking additional medication.

Researchers are thinking that a birth defect namely microcephaly possibly due to zika virus.

The CDC says it will issue guidance in the coming days on prevention of sexual transmission of Zika virus, focusing on the male sexual partners of women who are or may be pregnant. The CDC has already recommended that pregnant women postpone trips to more than two dozen countries with Zika outbreaks, mostly in Latin America and the Caribbean, including Venezuela. It also said other visitors should use insect repellent and take other precautions to prevent mosquito bites.

CDC recommends special precautions for pregnant women and women trying to become pregnant:Pregnant women in any trimester should consider postponing travel to the areas where Zika virus transmission is ongoing. Pregnant women who do travel to one of these areas should talk to their doctor or other healthcare provider first and strictly follow steps to avoid mosquito bites during the trip.

Women trying to become pregnant or who are thinking about becoming pregnant should consult with their healthcare provider before traveling to these areas and strictly follow steps to prevent mosquito bites during the trip.

Pregnant women who had already travelled to Zika areas must contact their gynecologist or physician to seek an opinion.

WHO is supporting countries to control Zika virus disease through:

• Define and prioritize research into Zika virus disease by convening experts and partners.
• Enhance surveillance of Zika virus and potential complications.
• Strengthen capacity in risk communication to help countries meet their commitments under the International Health Regulations.
• Provide training on clinical management, diagnosis and vector control including through a number of WHO Collaborating Centres.
• Strengthen the capacity of laboratories to detect the virus.
• Support health authorities to implement vector control strategies aimed at reducing Aedes mosquito populations such as providing larvicide to treat standing water sites that cannot be treated in other ways, such as cleaning, emptying, and covering them.
• Prepare recommendations for clinical care and follow-up of people with Zika virus, in collaboration with experts and other health agencies.