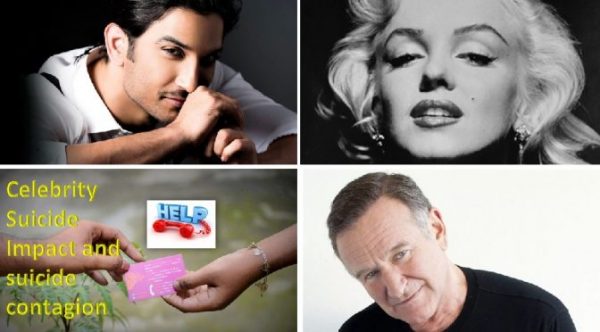 This week India’s talented and brilliant young actor Sushant Singh Rajput died of suicide.  Initial investigations and reports are telling that Sushant was suffering from depression and was on anti-depression drugs. Media and Netizens are saying that the actor’s depression was because of the rampant nepotism in the Bollywood industry.

This is not the first time we are witnessing the death of celebrity due to suicidal attempts. If we look back many famous actors –Robin Williams, Marilyn Monroe, Anthony Bourdain, Heath Ledger, Jiah Khan, Parveen Babi and now Sushant – to name a few – all have taken their life and were suffering from depression for various reasons.

What causes depression and what impact it has on celebrity followers?

Following Sushant’s sad demise, there are reports on the death of two people. Sushant’s sister-in-law who stopped eating after she got to know about Sushant’s suicide and passed away. Another 15-year-old boy died of suicide leaving a note saying, “If Sushant can die of suicide, why can’t I”.

Evidence suggests that the number of suicidal rates increases after the suicide of a famous and prominent peer or celebrity leading to suicide contagion. This risk of suicide contagion is high when the newspapers, online media, and social media cover the news in detail and make it sensational. The media will even go to the extent of explaining the method used (for killing oneself).   A study says that, after the death of Robin Williams, in the following months there was a 10% increase in suicidal attempts in the USA alone. We also read news about such incidents in India and elsewhere, after the demise of a celebrity, fans, and followers who have been looking up to their role model ‘committing’ suicide. One of the reasons for this is, often we know more about the role model than we do of our family and friends. We want to be like them in every aspect of our life – this mentality will have a profound impact on fans. Another reason is, if a person who may or may not be a follower of a celebrity, who is already suffering from depression, might also think and take drastic steps to end life.

“What fans should realize is, celebrities are humans like us. Their reel life is different from real life.  They have feelings and face challenges in life-like all of us that could lead to depression”

“Depression is a mental illness; it must be treated like other body illness”.

National Center for Health Statistics has revealed that the risk of suicide in men is high in the age bracket 40-44. In recent years suicide among women has risen twice the number. As per WHO around 800,000 people commit suicide every year. Over 90 percent of those who die due to mental illnesses, illnesses that could be diagnosable and treatable.

If a person is already having symptoms of mental illness or depression and they watch or read about a celebrity’s death, then the person is at high-risk behavior. They may hurt themselves in different ways – self-mutilation, stop eating, taking drugs or alcohol, or both and putting themselves recklessly in a dangerous situation. One must watch for any drastic mood and change of behavior if we know the person well. They may also withdraw from society and family, not engaging in activities, not care about personal appearance, and will isolate themselves – all these are signs of depression. Depression creeps into all aspects of a person’s life.

Note- sadness is a normal reaction to loss, problems, disappointment, and difficult situations. The person will be mentally strong and might feel ‘low or down’ for some time and it goes away after engaging in daily life activities. Whereas, Clinical depression affects the mood and lasts for days, weeks, months and years if not treated or taken care of. A major loss of a loved person, loss of child, breakup or divorce, getting bullied, lack of opportunities, leaving behind known environment or family history (hereditary), etc. could be reasons for clinical depression. Person will feel hopeless, worthless to live, lose appetite, sleep, guilty, anger, irritability and may stop taking anti-depression medicines. Major depression symptom is an obsession with death. They might watch movies and read about death ideas, make unusual calls to family, close friends or go on social media to express their feeling or delete messages before attempting.

When there is news about celebrity suicide or death if you know or suspect someone who might be suicidal don’t ignore your inner voice and suspicions. Encourage them to open up and talk about how it feels. Talk to the person right away and watch the reaction. Ask questions like “How are things, how do you feel” “What makes you sad, I want to help”, “Have you been thinking about celebrity death” And, if you feel strong about asking directly,  then ask  ” Are you thinking of taking the drastic step, about killing yourself” If the person opens up about death, do not keep suicidal information secret says Clinical Psychiatrists. If necessary, there is no wrong in breaking the confidence and inform immediate family or someone whom you can trust to take action to save a life.

Before it is too late, if you or someone you know needs help, call any of the helplines in your area, town, city, state or Country.

Remember: Depression is a mental illness, an illness that can be treated and cured