12 Most Toxic Fruits & Vegetables To Eat 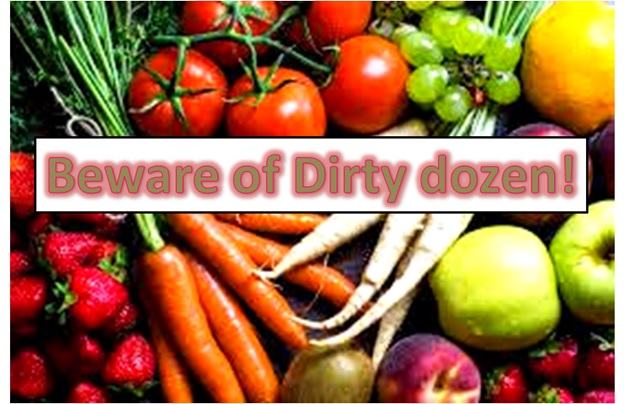 (This time of year people look for fresh produces as this is the season we get freshly grown fruits and vegetables. Some of the vegetables and fruits that are conventionally grown can be most toxic than others – you will be surprised to see the list of these produces that can be toxic because of chemical applications. The chemicals sprayed on non-organic crops are just as lethal for humans as they are for insects. -Healthylife)

Sure, organic food is expensive, but is buying conventionally-grown produce really worth the risk? If you are not yet aware, the chemicals sprayed on non-organic crops are just as lethal for humans as they are for insects. In fact, countless studies have linked pesticides to cancer, Alzheimer’s Disease, ADHD, and even birth defects. In addition, pesticides can also throw the ecosystem off balance.

Because of these effects, the organic movement has grown in popularity in recent years. However, the fact still remains that conventional produce is much more affordable than organic.

For this reason, it’s beneficial to know the most toxic fruits and vegetables (also known as the ‘Dirty Dozen’) so you can make it a priority to purchase those organic if nothing else. Doing so will reduce your exposure to endocrine disruptors and potentially carcinogenic compounds.

According to the Environmental Working Group (EWG), the following are the most toxic conventionally-grown fruits and vegetables:

Fruits and vegetables are essential for a healthy diet, but they’ll always be better for one’s health when they’re not contaminated with dangerous chemicals.