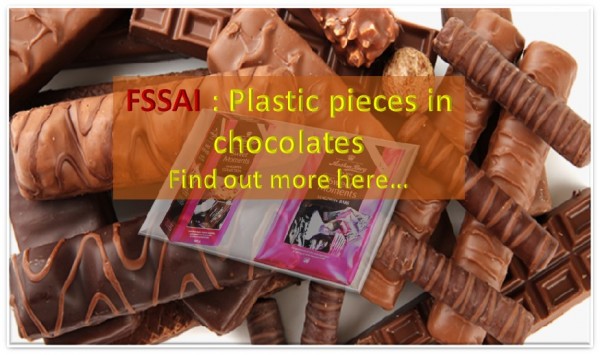 Now a days plastic monster is everywhere. It is not just on side of roads or ocean or drinking water, sea salt or rice, but now it is inside everybody’s favorite chocolates too!

Recently, the Food Safety and Standards Authority of India (FSSAI) has sent out an alert regarding the presence of plastic fragments exported from Denmark to various countries.

FSSAI reacted to the alert notice received from Rapid Alert System for Food and Feed (RASFF) issued by the European Commission.

According to the warning “There is a risk that the product in question contains small pieces of plastic which may cause choking in children. Thus, it is imperative to start follow up action, including recall”.

The FSSAI sent the alert note on January 5, a day after receiving an alert through the International Food Safety Authorities Network. Global network of food safety authorities is managed by WHO and Food and Agricultural Organization.

The product category under which the chocolates are sold is cocoa and cocoa preparations, coffee and tea.

The following four product descriptions have been identified which are imported:

Professor Arpita Mukharjee from ICRIER said that “these kinds of chocolates which have been detected with small pieces of plastics are not usually what small children consume. However, irrespective of age, it is a health and food safety issue. The EC has done the right thing by alerting the importing countries. In fact, European Union has more stringent standards for food than India and they are the same for the domestic market, export and import.

On RASFF portal public can see the alert regarding the risk revel of imported product into EU member states if the product does not meet the EU food safety standards. As per Prof Arpita, India does not have similar system reporting imported products.  The IFSS standards for milk and some of the milk products are still below the Codex standards. Importing sub standard or low quality products can pose health issues  (Codex General has developed several standard guidelines that should be implemented for the milk and milk products).

Considering the demand for dairy products in India, it is time to implement proper and strict standards to bring best quality milk products. Upgrading domestic standards and monitoring the imports at the ports of entry will help to avoid such big issues in future.

In response FSSAI officers from Kolkata stated that “AS of now, no sample or consignment has been found in the region. But following the instruction from FSSAI, continuing watching on the same is being carried out!”

This information was also made available by the apex regulator to consumers and stakeholders. It will help in any inadvertent consumption of the chocolate (product in question), so that consumers (public) can avoid buying it through online sales or by other means.