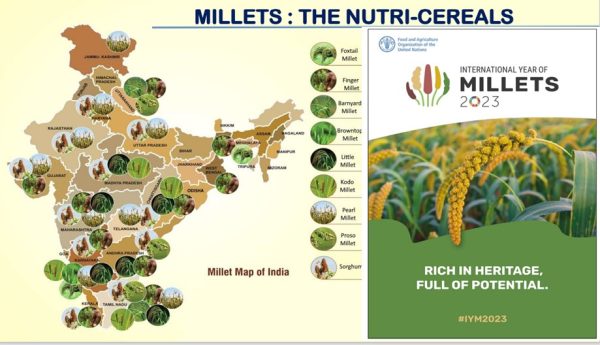 United Nations declared Year 2023 as the year of Millets.  Millets are grown and used as daily foods in Asia, Africa, some parts of Europe, rest of the world not that familiar with millets. To introduce the nutrition value, food security and adoptability to various weather conditions this year declared as year of millets. This is the #YearofMillets.

Millets are known as Nutri cereals. Compared to wheat, corn and rice millets exhibit much more nutrition value and considered to be best for health of both humans and animals. In fact, Millets are best choice for mother and young ones. Millets are the first plants that are domesticated on earth and are traditional staple foods of millions in Africa and Asia.  Millets are adoptable to adverse climate conditions and show resistant to many diseases and pests.

• Millets are often referred to as climate-resilient crops because they can grow on arid lands with minimal inputs and maintenance, are tolerant or resistant to diseases and pests and are more resilient to climate shocks than other cereals.

• Including and/or expanding the production of millets in national agricultural systems can support the transformation to more efficient, inclusive, resilient and sustainable agrifood systems for better production, better nutrition, a better environment and a better life.

2. The sustainable production of millets can fight hunger and contribute to food security and nutrition SDG 2 (End Hunger)

• In arid areas, millets are very often the only crops that can be harvested in the dry season and are a crucial part of the household food basket. Millets can help to overcome food scarcity in difficult periods, therefore contributing to the food security and nutrition of vulnerable populations.

• Millets can grow in very poor and fertile soils in dryland conditions and do not heavily deplete soil nutrients. By providing land cover in arid areas, they reduce further soil degradation and  help support biodiversity and sustainable land restoration.

3. Millets can be an important part of a healthy diet SDG 3 (Good Health and Well-Being)

• Millets are good sources of minerals, dietary fiber, antioxidants and protein. With a low glycemic index, they are a good option for people with high-blood sugar. Millets are also gluten-free and an excellent and cost-effective source of iron for iron-deficient diets.

• As whole grains, each variety of millets provide different amounts and types of fiber. Dietary fiber has a role in regulating bowel function, blood sugar and lipids, and satiation.

4. Greater consumption of millets can offer opportunities to smallholder farmers to improve their livelihoods SDG 8 (Decent Work and Economic Growth)

• The production of millets and the demand for them has declined as other cereals such as wheat, maize or rice became a dietary preference. By promoting millets and regaining market opportunities, additional sources of revenue can be created for smallholders and in the food sector, boosting economic growth.

• Millets were among the first plants to be domesticated and for centuries, they have been an important food for hundreds of millions of people in sub-Saharan Africa and Asia. They are deeply rooted in Indigenous Peoples’ culture and traditions and therefore a strategic crop to guarantee food security in areas where they are culturally relevant.

5. Proper handling of millets is key to maintaining their high quality and nutritional benefits SDG 2 (End Hunger) and SDG 3 (Good Health and Well-Being)

• Timely harvesting ensures good grain quality followed by threshing to remove grains from the stalks. Controlled mechanized processes for the dehusking of millets, at any scale, are more efficient than manual dehusking, as they reduce losses from spillage and provide clean intact grains that are ready for market. Smallholders and supply chain holders benefit accordingly from better incomes and reduced drudgery.

• Innovative agro-processing, especially in the production of nutritious foods, could target both traditional and non-traditional markets such as youth, urban consumers, tourists etc. This value addition could lead to market expansion, and increased food and nutrition security and incomes for smallholder farmers.

6. Greater trade in millets can improve the diversity of the global food system SDG 8 (Decent Work and Economic Growth) and SDG 12 (Sustainable Consumption and Production)

• Millets, including sorghum, account for less than 3% of the global grains trade. With the need to improve the resilience of global trade and its ability to respond to sudden changes in the food grain market, millets are a valuable option to increase output diversity and mitigate risks related to production shocks.

• Market structure and transparency, in relation to volumes and prices of millets, are key elements to ensure stability and sustainability. It is important to ensure that millet traders benefit from the same tools as other grain traders, such as digitalization, which could boost the added value of millet along the grains value chain and consequently provide more revenue opportunities for producers.

India is one of the leading producers of millets in the world with an estimated share of around 41 percent in the global production. India’s top five millet producing states are Karnataka, Rajasthan, Maharashtra, Gujarat, and Madhya Pradesh. Share of export of millets is nearly 1% of the total millet production.