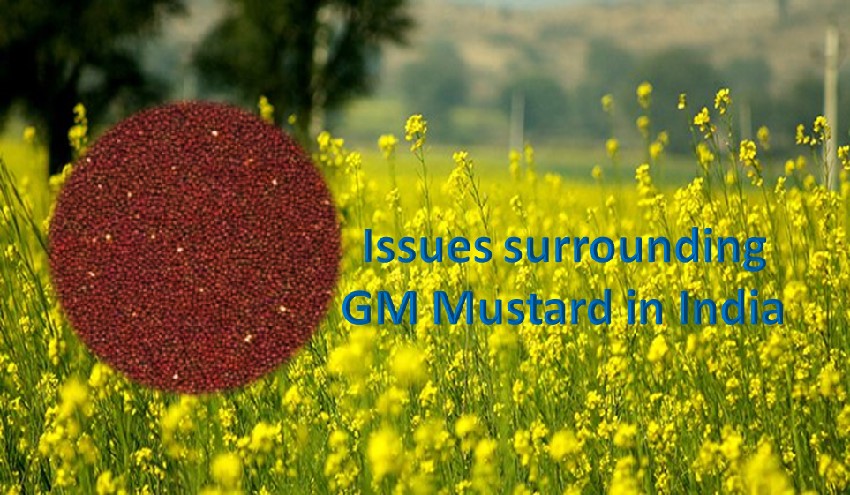 On May 11 of this year, India’s first genetically modified GMO Mustard has been recommended by environmental ministry for commercial approval. This GMO was developed by Delhi University.

Few countries including US and Canada are growing few GM crops. Whereas many other countries are rejecting it these crops because of the possible ecological risks linked to GMO technology.

In India, the recommendation has come as a shock as the issue is more complex. The complexity is because in India millions of farmers own small independent landholdings. At present mustard is grown in around 7 million hectares across in India.  Introducing GMO crop can lead to monocropping (similar to Bt cotton) and big corporates will lobby to take control of the crop.

What are the issues related to this GM crop?

Mustard is one the most important winter crops of India. One of the biggest concern is once this first GM crop is approved, then other GM crops could ask for the recommendation and make their way to crop filed. It is a known fact that more than hundreds of GM food crops are waiting to enter Indian agriculture field.

The scientific data is not revealed so far and it is hidden by developers and law regulators. Field trials and stages of GM crop development has not come in front of public eyes.

There is no clear information about the yield comparison. Developers claim that it is a high yielding crop however activists assert that the yield was compared to old low yielding varieties of mustard. The more yield does not guarantee more income to farmers. Farmers are afraid of fair price in the market because of their bitter experiences with procurement agencies in recent years. On the contradictory, the lead crop researcher of Delhi University Dr. Deepak Pental, has conceded that the GM mustard in question, has not been (even) tested against non-GM varieties!! Then how one can argue that GM mustard increases productivity when compared to other varieties?

Mustard is grown along with other crops. As per the reports new GM mustard seed is also tolerant to herbicides. It means the other crops cannot with stand herbicides that are sprayed to kill the weeds around GM mustard.

With all these raising concerns the Supreme Court of India in June asked the Central Govt. to provide the report on adverse effect of GMO mustard based on the research.  Aruna Rodrigues, filed a case to stop the commercialization of GM mustard in India. Earlier the bench comprising Chief Justice J S Khehar and DY Chandrachud had said that if the government takes a decision in favor of GM mustard crop then the court would like to hear the petition challenging the commercial release. Recently, the court had asked the center to get public opinion on such GM seeds before releasing it to commercial purpose.