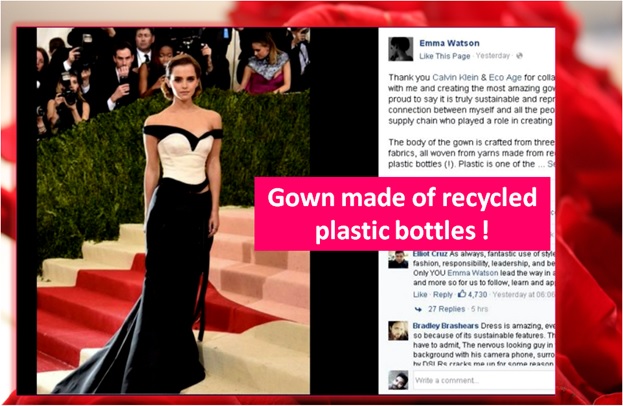 Emma Watson is one of the few celebrities who has maintained her dignity while affecting millions around the globe. The former Harry Potter star, now known for countless successful films, has been an icon for women’s rights and equality in the past and recently ‘wowed’ onlookers at the recent 2016 Met Gala. Reportedly, the British actor chose the celebrated opportunity to showcase sustainable and ethical fashion, as well as to show how to extend the lifespan of garments with her #30wears campaign.

The custom-made gown is made completely from recycled plastic bottles. A product of Calvin Klein and Eco-Age, the fabric is made of Newline – a yarn that is made from 100% post-consumer plastic bottles. The inner bustier is made with organic cotton, the lining is comprised of organic silk, and the zippers contain recycled materials, reports TreeHugger.

By turning heads with the fashionable dress, Watson was able to make a statement about the state of the environment as well as prove that it is possible to look fashionable as a conscious consumer.

She explained her decision to wear the dress on Facebook:

“Plastic is one of the biggest pollutants on the planet. Being able to repurpose this waste and incorporate it into my gown for the Met Gala proves the power that creativity, technology and fashion can have by working together.

Conventional cotton is one of the highest impact crops, using more chemicals than any other crop in the world. Organic cotton on the other hand, is grown without the use of the most harmful chemicals and is, therefore, better for the environment and people working with cotton. The organic silk used in the lining of my gown is certified to a standard that guarantees the highest environmental and social standards throughout production.”

This isn’t the first time Watson has advocated for sustainable fashion. In the past, the starlet created her own Fair Trade-certified line of clothing with British company People Tree. She also launched the #30Wears campaign which urges consumers to hang on to their clothes and reuse them as long as possible.

On Facebook, she shared that it is her intention to re-use the Met Gala gown’s components – which can be taken apart and transformed into various, easily re-wearable creations – at least thirty times.

“It is my intention to repurpose elements of the gown for future use. The trousers can be worn on their own, as can the bustier, the train can be used for a future red carpet look.”

According to the star, it is essential to value the items one owns and re-use them as much as possible. When she was interviewed for the 2011 book Naked Fashion: The New Sustainable Fashion Revolution, she told the interviewer:

“People can be so trend-oriented – after two or three months there’ll be something new and they’ll dispose of what they had before. But I think people should value what they own.”

One thing is for sure: Watson stands out as a positive role model for people of all ages by using her celebrity status for positive purposes.