The last of the Ringling Bros 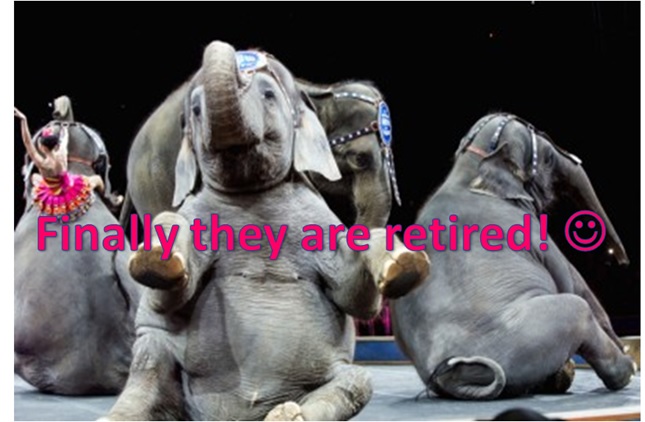 The Ringling Bros. Elephants Just Performed Their Last Show And Are Now Retired !!

The last 11 elephants working as part of the Ringling Bros. Circus performed their last show on Sunday and are set to retire to the elephant conservation center owned by the circus in Florida.

Ringling Bros. announced that they would be moving up the date of the elephants’ retirement to May this year rather than the promised 2018 retirement. Even though they agreed to completely stop using elephants in their shows, the long wait still outraged animal rights advocates who said that the large creatures should be able to stop working immediately.

On Sunday at the Providence, Rhode Island show, the elephants performed for the last time and many felt sad but elated during their final bow. The show was streamed live on Facebook so that anyone could watch their very last act.

Six Asian elephants danced, balanced on each others’ backs, pretended to nap and sat on their hind legs as Ringmaster Johnathan Lee Iverson told the crowd, “This is a very emotional time for us.”

Elephants have been used in the circus in America for over 200 years and for more than 100 years in “The Greatest Show on Earth.”

Though their final exit might seem sad for many who will never see them perform again, it’s a huge victory for the elephants and advocates for animal rights. The elephants live sad lives on the road with the circus, spending most of their time in chains and boxcars for days at a time. Starting at less than 2 years old, the elephants are torn from their mothers and “broken” so that they learn to fear the bullhooks, ropes, and electric pods and become obedient. For the remainder of their lives as performers, they are constantly beat and hit for the slightest mistakes they make.

There is no regulation for animals performing in circuses and the only evidence of this abuse has been caught by undercover investigations by animal welfare groups like PETA.

A total of 40 Asian elephants will now be residing at the Ringling Bros. and Barnum & Bailey Center for Elephant Conservation, but the fate of other animals in their circus is still unknown. When the group had announced that they would retire their elephants, they added that they “will continue to feature other extraordinary animal performers, including tigers, lions, horses, dogs and camels.”

At the last show on Sunday, protestors still met around the venue to protest the use of ALL animals in the circus because of the abuse and stress they endure.

Author: HealthyLife | Posted on: May 3, 2016
TAGS: animalsElephantsRingling Bros
« Previous Article Next Article »
« Applebee’s, IHOP, And McDonald’s Remove Soda From The Kids’ Menu Gown made of recycled plastic for Emma Watson ! »