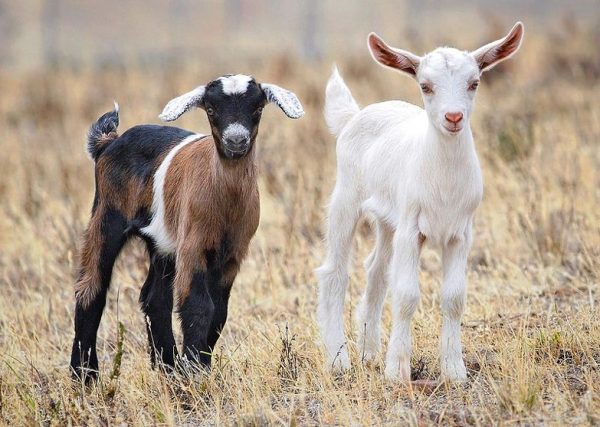 Shocking!- Now the GMO effect on goats!. Goats fed transgenic GM soy feed have altered DNA and the milk produced by their mothers is of lower quality, which affects the offspring.

If you have not yet ditched GMO’s  from your diet, you may want to consider doing so.
According to a study published earlier this year, goats fed transgenic, GM soy feed have altered DNA, and the milk produced by the mothers is of lower quality, which affects the offspring.

Kid goats were studied both in vivo and post-mortem and what the researchers determined is not good. It was found that kids which fed on GM soy had both DNA fragments that were not supposed to be there (i.e., are not normally found in goat milk), and the immunoglobulin concentration was altered. In addition, the colostrums – the ‘pre-milk’ in all mammals that provides incredible immuno-defense to offspring – had significantly lower levels of both protein and fat.

This is just one more reason individuals and populations everywhere need to reconsider their stance on genetically modified crops.

The study states:
. . . transgenic DNA fragments were amplified (P < 0.05) in samples from goats that received the transgenic soybean.”

That’s not all: The baby goats that came from mothers fed GM soy also had altered physical traits. For instance, a significant height difference at the chest and withers than their non-GMO fed counterparts was observed.

Of course, it would be irresponsible to jump to conclusions from one study, but this is not the first report in which genetically modified foods were found to alter DNA – a very concerning find. As Natural Society shares, morphological and biochemical changes were reported in male rats fed GMO corn.

What does this mean for humans in locations like the United States where the majority of corn and soy is genetically modified?

According to Geneticist David Suzuki, human beings are part of a “massive genetic experiment,” and one is right to be concerned. Suzuki points out:

“One small mutation in a human being can determine so much, the point is when you move a gene, one gene, one tiny gene out of an organism into a different one you completely change its context. There is no way to predict how it’s going to behave and what the outcome will be. We think that we design these life forms, but it’s like taking the Toronto orchestra prepared to play a Beethoven symphony and then you take some random drummers from “here” and flip them in with the Toronto symphony and you say play music. What comes out is going to be something very very different. Publicists say that there is good intention behind GMOs, but the fact of the matter is it’s driven by money.”

Until genetically modified foods are banned in all countries, take initiative for your and your family’s health by choosing to abstain from GM-containing foods. Most processed foods containing artificial sweeteners (high fructose corn syrup, for example) contain GMOs, so opt for organic, source local, and grow your own food so you can take control of your own health and help preserve the planet.