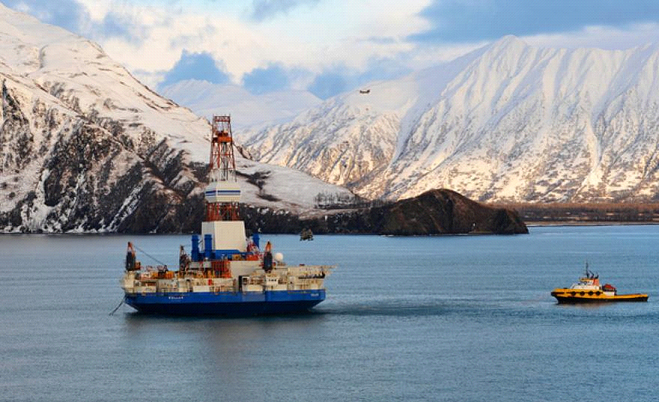 “Big oil has sustained an unmitigated defeat. They had a budget of billions, we had a movement of millions. For three years we faced them down, and the people won. The Save the Arctic movement has exacted a huge reputational price from Shell for its Arctic drilling program. And as the company went another year without striking oil, that price finally became too high. They’re pulling out.”

(Royal Dutch Shell has abandoned its long quest to become the first company to produce oil in Alaska’s Arctic waters, darkening the nation’s long-term oil prospects and delighting environmental groups that tried to block the project. After years of effort, Shell is leaving the region “for the foreseeable future” because it failed to find enough oil to make further drilling worthwhile. The company has spent more than $7 billion on the effort, slogged through a regulatory gauntlet and fought environmental groups that feared a spill in the harsh climate would be difficult to clean up and devastating to polar bears, walruses, seals and other wildlife)

Years of activists’ efforts have paid off! As The Guardian reports, Shell has abandoned its controversial drilling operations in the Alaskan Arctic for the foreseeable future. In what environmentalists are describing as “an unmitigated defeat” for big oil, the Anglo-Dutch company has admitted that the profit losses and fierce public opposition it is facing have both played a big role in its decision to abandon drilling up north.

For years, Shell has stressed the enormous hydrocarbon potential of the Arctic but only recently has admitted that the popular opposition from the public is too much.

Shell said today it had made a marginal discovery of oil and gas with its summer exploration in the Chukchi Sea but not enough to continue to the search for the “foreseeable” future. Shell’s chief executive, Ben van Beurden, was worried that the row over the Arctic was undermining his attempts to influence the debate around how to tackle climate change.

In its hunt for oil in one of the world’s last pristine environments, Shell has spent over $7 billion with little to show for it.
In a statement released today, Monday, September 28th, Marvin Odum, the director of Shell Upstream Americas, said:
“Shell continues to see important exploration potential in the basin, and the area is likely to ultimately be of strategic importance to Alaska and the US. However, this is a clearly disappointing exploration outcome for this part of the basin.

Shell will now cease further exploration activity in offshore Alaska for the foreseeable future. This decision reflects both the Burger J well result, the high costs associated with the project, and the challenging and unpredictable federal regulatory environment in offshore Alaska.”

Greenpeace UK executive director John Sauven said this in response to the news:
“Big oil has sustained an unmitigated defeat. They had a budget of billions, we had a movement of millions. For three years we faced them down, and the people won.
The Save the Arctic movement has exacted a huge reputational price from Shell for its Arctic drilling programme. And as the company went another year without striking oil, that price finally became too high. They’re pulling out.”
The organization hopes that President Obama will use his remaining months in office to say that no other oil company will be licensed to drill in the American Arctic. Only time will tell…
A number of energy industrialists and other experts have been questioning the wisdom of Arctic drilling, including former BP chief executive John Browne, for a while now. Many consultants argue that Arctic oil is too expensive to find and develop in either a low oil price environment or in a future world with a higher price on carbon emissions. Truly, the age of fossil fuels is coming to an end.

There are plenty of ways Earth’s energy needs can be met sustainably (especially if humans learn to reduce their carbon output and energy consumption). For example, in one day, Denmark produced 140% of its energy needs via wind power. And according to a new report by Greenpeace, Earth could go 100% renewable by 2050.

This is a momentous time in history, and this news deserves to be shared. Spread the word, comment below, and continue being a steward for the environment. Your efforts do matter.