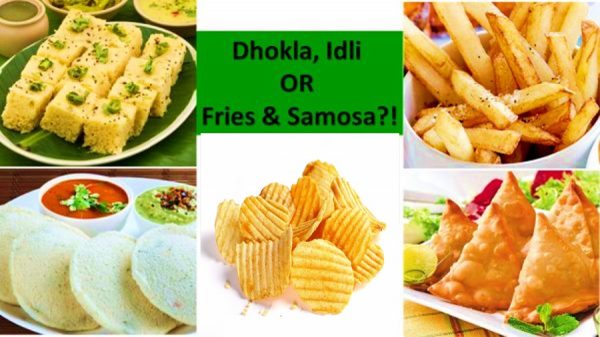 We all now know that fried foods are not good for body. Eating fried foods not only increases weight, it increases obesity, craving for more fat, hurts heart, can cause acid reflux and brings mind to lethargic state. Food with high levels of fats such as potato chips, noodles, burgers, pasta, pizza – all are unhealthy foods and can harm both adults and school going kids. Recently in India such junk foods sale is prohibited or discouraged from school boundaries. This includes samosa, fried chips, sweetened beverages and other types of foods that supply high fat to our system. Under the new regulations and guidelines) proposed by FSSAI such foods are not allowed near schools.

Studies reveal that about one in five children in India is either thin or overweight and obese. Indian Academy of Pediatrics Panel coined a new acronym JUNCS from Junk food, high in fat, sugar and salt, ultra-processed food, nutritionally inappropriate food. This could include fatty foods cooked at home, caffeinated, colored, sweetened beverages and carbonated beverages. Piyush Gupta, Professor of pediatrics at University college of Medical sciences, New Delhi recommended that all children including adolescents should restrict consumption of JUNCS food to no more than one serving per week!

The FSSAI of India has proposed that foods that are high in fat should not be sold even the school canteens or within 50 meters of a s school campus. Such products are also barred from advertising in school and up to 50  meters from school boundaries. In its recently releases statement (November 2019) FSSAI proposed regulations and guidelines seeking public opinion and other stakeholders by December 3rd, next month. This will help to sought regulation to make clear with what is healthy and not healthy for children.

This regulation also applies to all food and beverages including mid-day meals which is benefiting many poor and middle-class children across India. Since many kids depends on school meals, they should be provided with healthy meals and it should not be junk food. Sale of such food or feeding kids junk foods and beverages is prohibited inside school in mid-day meal.

Which are the foods on healthy menu then? Idli and dhokla are the answers!

According to the FSSAI proposed guidelines, 70 to 80 per cent of food that kids eat should be a mix of healthy ingredients like cereals, millets, pulses, milk or milk products, eggs, lean meat, fruits and vegetables, fresh soup, porridge or traditional recipes such as idli, khandvi, poha or dokla!

Many states in India acting in this regard. Kerala government recently banned sale of junk foods near schools. In fact, in 2016 itself Kerala introduced ‘fat tax’ on fast food restaurants! In many states including Maharashtra, Karnataka, Uttar Pradesh junk food is banned inside school as well as outside school premises. According to cardiologist Dr. Pradeep Nair, Chennai “Rules for food served in schools have been long overdue. We see people in their 30s with hypertension or diabetes, many are likely facing the consequences of the dangerous combination of unhealthy food and sedentary lifestyle”.

At the end of the day rice and lentil is better than any such junk food. Teaching children eating healthy and to be active is responsibility of both parents and teachers.