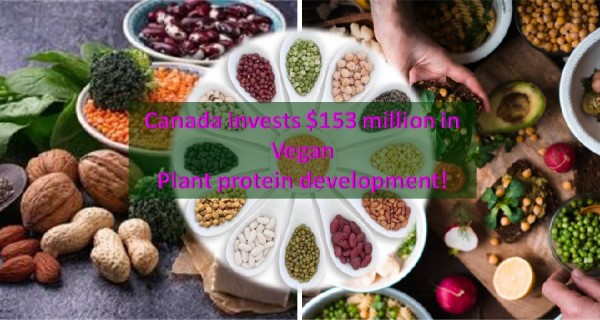 Canada is known for its Vegan friendly restaurants and in fact, there is an increase in number of vegans and vegan restaurants in Canada compared to many countries. Both vegans and non-vegans love many vegan restaurants. Food quality and variety both are attracting people. Many fast food chains have been increasing and including vegan and vegetarian’s food in the menu.

This investment is making Canada a world leader in plant-based protein market. Minister of Public Safety and Emergency Preparedness Ralph Goodale announced this investment announcement. Mr. Goodale also mentioned that $153 million will be matched dollar to dollar by private sectors.

According to CEO of Protein Industries Bill Greuel, “the global demand for plant-based protein continues to grow at a rapid pace and the signing of the contribution agreement will allow protein industries Canada to help industry seize this opportunity”

“It’s a market that’s expected to expand in a significant way.” Frank Hart

Canadian Government is teaming up with Academic institution, nonprofit organizations, and with Companies of all sizes to make this investment more productive and to stimulate innovation that creates not only the jobs, also helps to meet the demand. Big brands such as Maple Leaf Foods are taking note of this growing trend of veganism. Maple Leaf spend US $120 million to buy Seattle based Field Roast Grain Meat Co and made deal for $140 million with Light Life Foods following an investment in Tyson Foods which is a plant protein Company Beyond Meat two years back.

This investment means there will be more options for vegan protein in Canada. According to Canadian media- Federal government at last agreed to the investment due to the success of the vegan Beyond Burger at fast food chain A&W Canada. Protein Industries looks to open processing plants for peas and bean the two-key ingredient in the Beyond Burger in Canada’s Western provinces.