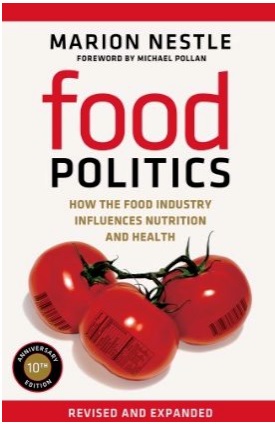 Extract of an interview with Professor of nutrition Marion Nestle.

Marion Nestle is the Paulette Goddard Professor of Nutrition, Food Studies, and Public Health at New York University. She is the author of Food Politics and (with Malden Nesheim) Why Calories Count: From Science to Politics. Nestle spoke to Nutrition Action’s Bonnie Liebman from New York.

Q: Why does the food industry try to influence what we eat?

A: Food companies are not social service agencies. They’re businesses, and their job is to sell products. Once you understand that, everything else follows.

Their job is to make you choose their product and not someone else’s and, if possible, to eat more. The “eat more” message is an inadvertent consequence of the normal way of doing business.

A: No. And it’s not only that food companies have to make a profit. If they’re publicly traded, they have to grow their profits every 90 days. They have to report to Wall Street whether they’ve met their growth targets, and if they don’t grow, they get in trouble. They have to grow or nobody will invest in them.

To use a couple of recent examples, Campbell’s is putting salt back in some reduced-sodium soups because they weren’t selling. And PepsiCo is getting killed by its investors because Pepsi was trying to sell healthier foods and the company isn’t growing fast enough. I’m always reminding everyone that this is about business, not health.

Q: How do companies influence what we eat?

A: Advertising is the most obvious way. Food companies put hundreds of millions of dollars into it. There is no nationally advertised food product that has a budget of less than $10 million a year, and that’s way on the low end.

For a big company like Coca-Cola or PepsiCo, individual products can have $150 million budgets. McDonald’s and PepsiCo–which owns Frito-Lay and Gatorade–each spends as much as $1 billion a year.

And if you can’t sell it here, you sell it there. This last quarter, McDonald’s, Coke, and Pepsi all reported that the growth in their sales was overseas. It’s too competitive here so they’re moving hard into Third World countries, or “emerging markets,” as they’re now called.

A: It’s exactly like cigarettes in terms of marketing. But food is not tobacco. Cigarettes are very simple. There’s one message: don’t smoke and, if possible, put companies out of business.

No one is trying to put food companies out of business because everybody has to eat. The marketing is the same, but the issues are much more complicated.

Q: And it’s not just advertising?

A: No. Companies also put foods into school vending machines and sports facilities, and they use product placement in movies and TV shows. All are ways companies are trying to overcome the difficulty of trying to sell products in a hugely competitive environment where the marketing is so ubiquitous that no one even notices.

A: Most of us don’t. Part of marketing is for people to find it amusing or entertaining but not to notice it as marketing.

I learned that the hard way when I went to a conference of anti-smoking advocates at the National Cancer Institute in the early 1990s. They had slides of cigarette marketing to kids all over the world in the most remote, poverty-stricken places.

I was really astounded. It wasn’t that I had never seen marketing. I had just never paid attention. An advertising executive explained that this is exactly what is supposed to happen. Advertising is supposed to slip below the radar of critical thinking. So then I started noticing it. And Food Politics was the outcome.

Q: Why do companies try to make their foods look healthy?

A: Research shows that if a product has something added to it that consumers think is healthy, it’ll sell more easily. So companies put health claims on packages, and they put vitamins into anything they can, because they can market the foods as healthy.

Q: Companies have been adding vitamins to foods for some time.

A: Yes, but it’s gearing up as regulatory agencies become laxer and laxer about enforcing standards. Vitamins have gotten into foods like soft drinks and water.

Q: What influence does the food industry have behind the scenes?

A: Every food company has a lobbyist. Even though advocacy organizations have lobbyists too, the difference in resources is pretty staggering.

Company lobbyists meet with officials in federal agencies to make sure that the government doesn’t say that people should be eating less of their products. And companies hire groups like the Center for Consumer Free data to be their attack dag and to slam their critics.

There’s a big attack on the science all the time. “Junk science” is the term that’s used for anything industry’s defenders don’t like. They insist that unless you can absolutely prove that soft drinks, salt, saturated fat, or something else is harmful or leads to obesity, you can’t criticize it.

Q: What public relations ploys does industry use?

A: Food companies say that what we eat is a matter of personal choice–that if your kids are fat, it’s your fault; that nobody’s forcing you to eat their products; that no one is forcing people to go to McDonald’s or drink soda.

Just because the food industry spends more than a billion dollars a year in advertising and markets directly to kids doesn’t mean you have to go there, they argue.

But parents say that they don’t want to fight with their kids about food. More often than not, they give in and the marketers win.

Q: How do supermarkets influence what we eat?

A: Retailers aren’t social service agencies either. No matter how valuable a role they play in a community, their job is to make money. And they won’t be there if they don’t.

Supermarkets all look alike because their marketing people all read the same research. And that research shows that you want products at eye level and at the ends of aisles and at the cash register. And companies pay supermarkets to get their products there. Companies also agree to advertise those products, so there’s collusion to sell the most profitable products.

Q: Are toast of them junk food?

A: Yes. If you’ve got a supermarket aisle that’s 120 feet long and it’s got nothing but chips and snack foods or sodas in it, you know those are profitable items.

Q: And you see the same aisles at health food stores?

A: Yes. They often sell healthy-looking or organic junk food. Some of their food is better–cold cereals that have no added salt, for example. But they also have huge sections of candy, chips, sodas, cookies, cakes, and other sweets.

Q: Is there anything else that’s below the radar that’s pushing us to eat unhealthy foods?

A: The food environment. There’s inexpensive food available in large portions 24/7. If you want to make someone fat, give them food as close at hand as possible in the largest portions possible. That’s what we do.

Research by Brian Wansink at Cornell shows that if food is in front of you, you’ll eat it. And if it’s within arm’s reach or it’s a large amount, you’ll eat more.

If there’s candy at the checkout counter at Staples, you’ll pick up candy bars when you buy paper or toner. There’s candy on the counter at CVS, Duane Reade, Walgreens, and other drugstores. It’s there for a reason. To make you buy it on impulse.

And the cheaper and more of a bargain it is, the more people buy. Which is why it’s not a good idea to have a two-liter soda that costs less than a two-liter bottle of water.

Q: What role do restaurants play?

A: Half our food dollar is spent there. And that means that restaurants are an enormous influence on what people eat. If you’re worried about obesity, you can’t eat in restaurants … or you have to bring several friends along to share. Even then, you get too much.

Portion sizes are staggering. It’s not that people are overeating a few calories a day. They’re overeating hundreds or a thousand or more. The extra weight sneaks up on you.

Obesity is not a trivial issue. The entire society is going to be dealing with it for years to came, because people are going to need help. Someone’s going to have to pay for that. It’s much easier to avoid becoming overweight than to lose excess weight.

Q: Why are we so susceptible to an environment that pushes us to eat more?

A: The physiological controls of food intake are better at getting people to eat more, not less. They’re designed to make sure that you don’t starve and that your brain has fuel all the time. They’re much better at telling you when you’re hungry and need to eat more than when you need to stop eating.

There’s no evolutionary reason up until now for selecting for genes that tell you when to stop eating. So you’re stuck with the physiology that makes you love eating and makes it hard to stop. That’s also a barrier to personal responsibility.

A: Local and organic and seasonal foods are important because they give consumers a choice and they represent an explicit critique of the existing food system. Their popularity explains why mainstream companies are buying organic food companies, some of which sell organic, healthy-sounding chips, cookies, sodas, and other junk.

Q: So we should buy local and organic food?

A: Yes. There’s not enough to feed everybody, but if everyone bought a little more organic food and food from farmers markets, it would make a big difference. Right now only a small fraction of the population is buying these foods. But the fraction is growing, and the food industry needs growth.