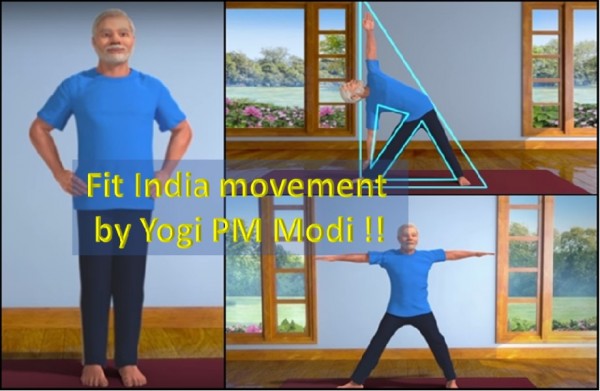 Indian Prime Minister Narendra Modi is a Yogi himself.  He is responsible as he convinced United Nations to celebrate International Yoga day that falls on June 21st of every year.

PM Modi while addressing Indians in his Mann Ki Baat, a radio talk show mentioned that yoga is a guarantee of both fitness and wellness and advocated for Fit India.

Group of youngsters with their skills has created series of animated videos where PM Modi himself is a model. Through their creativity PM has become a yoga instructor.

These videos shows PM Modi practicing different yoga asanas. The animation also describes the Yoga asanas – how to perform asanas as well as benefits of asanas.

These videos were released after PM Modi’s pitch for Fit India. For now, videos are available in English and Hindi. More languages are soon to be added to videos. Important and most commonly used, important yoga asanas with instructions are covered in the videos.

“A Healthy India is the cornerstone of a developed India. In that spirit, let us make #FitIndia a full-fledged mass movement that further popularizes sports and fitness among our youth” @narendramodi on twitter

In his Mann ki baat, PM urged people to ensure that they perform yoga every day and motivate others including family and friends.  While talking about Fit India and preventive healthcare PM stressed that yoga is a form of preventive healthcare. Healthy India is a vital as clean India – he mentioned in his talk. He also urged people to start practicing yoga today and get ready to celebrate June 21st International yoga day. He strongly believes that Fit India movement will take India forward on the path of fitness and wellness.

As Modi says Preventive healthcare is after all the least costly and the easiest healthcare strategy.

Watch PM Modi as yoga instructor in this video: