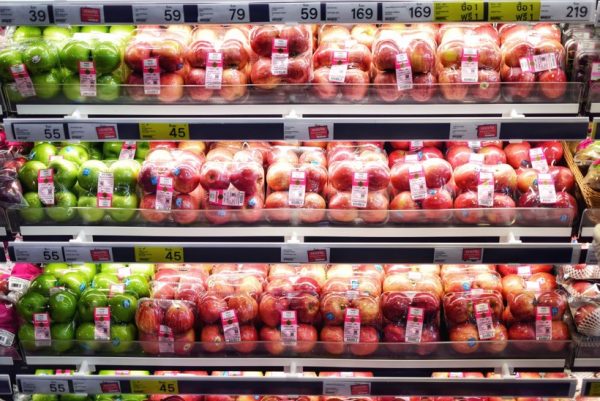 Soon spring will be here.  We get many produces in markets. This time of the year everybody wants to buy fresh produces for their family. However, with growing concern about the origin of the produces, awareness about GMO and its effect on family members health, people avoid buying produces. In the process they may lose sight of good produces that are essential and packed with rich nutrients.  If you are afraid of buying some produces that may not be organic or conventional produce then, here is what you should know. Read the PLU on the produce stickers and understand whether the produce grown organically or it is a GMO.

The stickers found on fruits and vegetables at markets contain 4-5 digit numbers known as Price Look-Up (PLU) codes. These codes have been around since 1990. They are primarily assigned to identify individual bulk fresh produce (and related items such as nuts and herbs) and will appear on a small sticker applied to the individual piece of fresh produce.. They help to distinguish between conventionally grown, genetically modified (GMO) and organic products. The International Federation administers this system for Produce Standards, an affiliate of the Produce Marketing Association. There are currently over 1400 PLU codes issued.

The mission of the IFPS is to improve the supply chain efficiency of the fresh produce industry through developing, implementing and managing harmonized international standards. PMA serves as the General Secretariat of the IFPS in an effort to use the PLU number globally. Additional information and a listing of PLU numbers can be found by accessing the IFPS website.

Since PLUs are currently optional to use, and especially since many Americans are afraid of genetically modified foods, retailers, and even some seed suppliers when selling to farmers, opt out of using the identifying numbers.

What the codes mean?

Produce items containing a four-digit PLU are considered “conventional,” which means they are not technically GMO, but may still contain pesticides and other toxic residues. The Environmental Working Group (EWG) has created a helpful shopping guide for picking out safe produce

5-digit PLU code starting with 9 (9xxxx) = organically-grown : When shopping for fruits and vegetables, your first choice will want to be those labeled with a five-digit PLU that begins with a “9,” which indicates that it is certified organic.

5-digit PLU code  starting with 8 (8xxxx) = genetically-modified : Most Americans say they would avoid GMOs if they were labeled. Therefore, it is well known fact that PLU number was “hypothetically” created with 5 digits starting with an 8. In other words in case if you see produce items you will want to specifically and always avoid are those bearing a five-digit PLU beginning with the number “8,” as these are GMOs.  So far, in USA there are few GMO foods available in market -soybean, potato, corn, peas, canola, cotton, papaya, tomatoes, radicchio, zucchini and yellow squash.

How to obtain a complete list of PLU codes?

Refer to the IFPS (http://www.ifpsglobal.com/) PLU search page and then simply select ‘Search’. Do not fill in or select any options from the fields. This will present the entire list of existing PLU codes. You then have the option to export the entire list to Excel and manipulate the list however, you choose.

Image credit: Photo by Ethan Feng on Unsplash (Free for commercial use)