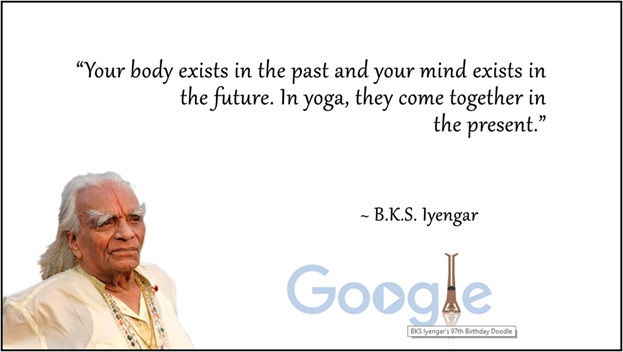 Iyengar was an eminent exponent of yoga as enunciated in the ancient ‘Patanjali Sutra’. Iyengar was not just a yogacharya, but he was a ‘life guru’ who always imparted security and comfort to his disciples with a smiling face. Iyengar personally trained hundreds of teachers to disseminate his approach, which uses props such as belts, ropes, blocks and bolsters to help novice yoga students achieve the poses.  He also authored 14 books on yoga techniques, what became known as ‘Iyengar Yoga’. His books were translated into 17 languages. The senior-most internationally acclaimed yoga guru had taught ‘yogasanas’ to many prominent personalities along with commoners. Among those whom he introduced to yoga were eminent socialist leader Jayprakash Narayan, famous philosopher J Krishnamurti , world renowned violinist Yehudi Menuhin and lifestyle guru Martha Stewart. Iyengar was included in TIME’s list of the world’s 100 most influential people in 2004.

Iyengar had suffered years of ill health with bouts of malaria, tuberculosis and typhoid fever and says the regular yoga practice helped him to recover the illness. Tirumala Krishnamacharya, Father of Modern Yoga, who was brother in law of BKS was one of the key figures behind the revival of “hatha yoga” – from which Iyengar yoga developed  in the early 20th century which focused on the correct alignment of the body. In 1952, Yehudi Menuhin befriended BKS Iyengar. Menuhin believed doing yoga improved his playing and invited Iyengar to Switzerland with him in 1954.

After that visit, Iyengar travelled frequently to the west to demonstrate his special technique and hundreds of Iyengar yoga centers sprang up around the world. His eldest daughter Geeta and his son Prashant have become internationally renowned yoga practitioners and now run the Ramamani Iyengar Memorial Yoga Institute – which BKS Iyengar founded in 1975 in honour of his late wife.

Google Doodle: Google has honored the birthday of the man credited with bringing yoga to the West – BKS Iyengar – with his very own doodle on would have been his 97th birthday. The interactive doodle shows the renowned master in various yoga poses within Google’s logo and is meant to characterize the “tremendous control and discipline, which he exercised in ways not limited to confounding long headstands,” Google said.