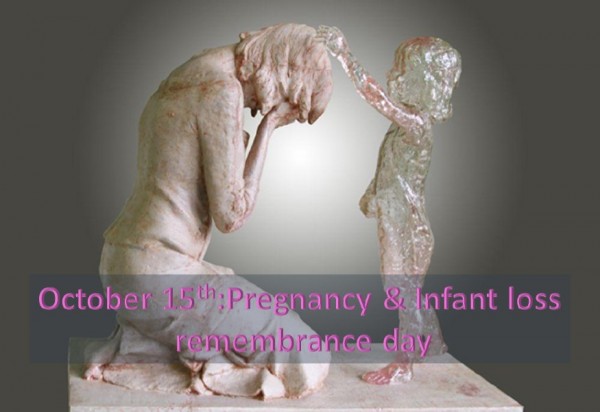 In October 1988, President Ronald Reagan declared October as National Pregnancy and Infant Loss Awareness Month saying, “When a child loses his parent, they are called an orphan. When a spouse loses her or his partner, they are called a widow or widower. When parents lose their child, there isn’t a word to describe them.”

Couple of years back Facebook CEO Mark Zuckerberg announced that he and his wife, Priscilla Chan, are going to have a baby girl. In his public post that went viral, Zuckerberg wrote: “We want to share one experience to start. We have been trying to have a child for a couple of years and have had three miscarriages along the way. You feel so hopeful when you learn you are going to have a child. You start imagining who they will become and dreaming of hopes for their future. You start making plans, and then they are gone. It’s a lonely experience.” Zuckerberg’s frank admission of his wife’s three miscarriages led to a vast outpouring of stories from women and families who have faced a similar situation.

Approximately 1 in 4 pregnancies worldwide will end in miscarriage. According to the World Health Organization, 4.5 million stillbirths occur each year worldwide. Miscarriage is the loss of a pregnancy in the first 20 weeks. About 10 to 20 percent of known pregnancies end in miscarriage, and more than 80 percent of these losses happen before 12 weeks. In medical terms it is called “spontaneous abortion“.

There is no name for those parents who have lost a child. There seems to be a divide between those who lose their babies as embryos, those who miscarry later or whose babies are stillborn, and those who lose their children after birth. It is devastating to have a child who is stillborn or to lose a child after having a chance to hold and get to know them. The pain is more obvious and tangible and people are more understanding of the grief that accompanies such an event.

However, for those who miscarry (loss of a baby before week 20), the pain can be so easily dismissed by onlookers. “Oh, you can try again,” “you have a long life to live, “another baby will come along,” “get over it, move on and try again,” they might say. What many people don’t realize, however, is that the pain is just as real for these parents because they missed the opportunity to hold their baby. It is extremely difficult to try again, some never do and people who have not gone through it are confounded as to why.

There is an increasing movement to help families remember and support one another on October 15.

Moderate to severe cramping in the uterus, which feels like menstrual cramping, or in the lower back may be a possible sign of miscarriage. Abdominal pain usually begins after you first have some bleeding. It may feel cramp or persistent, mild or sharp, or may feel more like low back pain or pelvic pressure. It is common to have mild uterine cramping during the first trimester. This occurs because the uterus is stretching to accommodate your pregnancy. Mild cramping that is not accompanied by bleeding is considered normal. However, women experiencing moderate to severe cramping should notify their physician. Sadly, early miscarriages are very common.

Bleeding: Bleeding may be a sign of impending miscarriage. Some women may experience mild spotting during their first trimester and go on to have a healthy pregnancy. Spotting is a brown or pinkish discharge. Bright red bleeding that is similar to or worse than that of an actual period may be a sign of miscarriage. This bleeding is usually accompanied by strong menstrual-like cramping. Women should wear a pad or liner to accurately measure the amount of bleeding. For example, soaking a pad every hour would be considered severe bleeding, whereas soaking one half of a pad each hour would be moderately heavy bleeding and so on. Vaginal spotting or bleeding is usually the first sign of miscarriage. Keep in mind, though, that up to 1 in 4 pregnant women have some bleeding or spotting (finding spots of blood on your underpants or toilet tissue) in early pregnancy, and most of these pregnancies do not end in miscarriage.

Absence of Fetal Heartbeat: After approximately six weeks of gestation there should be the presence of a fetal heartbeat. This is detected through a transvaginal ultrasound. Your doctor may order an ultrasound to examine viability of a fetus. If the dating of the pregnancy is correct, and by seven weeks there is no detected heartbeat, it is a probable sign of miscarriage.

Decrease in Beta HcG Levels: In pregnancy, the hormone HcG begins to rise after conception and rises continuously through the first trimester. In the beginning weeks it doubles every two days or so. In the event that you are experiencing signs and symptoms of miscarriage, your doctor may want to measure your beta HcG. If your levels are declining, or not rising, it is a sign of an impending miscarriage.

What causes a miscarriage?

Our bodies are a wonderland. Or sometimes, a haunted house. Coping with a miscarriage can be a heartbreaking experience. Losing a baby is tragic no matter how early in pregnancy it happens. You will need to allow yourself a chance to grieve. Your partner will need time to come to terms with the loss, too. Every person’s experience of bereavement is different, so give yourselves plenty of time to recover.

There will be hormonal changes and women will bursts into tears often. Letting go of the idea that you are having that particular baby on that date is so hard. People tend to say things like ‘I’m sure it’ll be OK next time’, but that’s not the point. You wanted this baby. Women feel more distressed and need more support from the partner. In a study when men were asked about miscarriage, they said that it was a minor setback in life whereas women felt things are falling apart.

What one should do to overcome the grief?

1) Try to discuss with your life partner and do not hesitate to cry.

3) Watch movies, go for shopping and spend time with friends with whom you can talk about your feelings. Join communities and discussion board where people with similar experience open up and help to overcome your grief.

5) It is natural to get hurt when you see babies and kids with their parents. Play with little babies or spend time with kids. If you love pets, get pet dog or cat. Play with your pets.

7) Remember it is not end of the world. Life gives you more options. Pick up the best option and move on with it. Get help from counseling and talk to parents who had similar experiences.

8) Meditate – Yoga, breathing exercise and meditation helps a lot to calm disturbed mind. Practice yoga with a group and meditate at home.

9) Be with friends and families and with your loved ones as much as possible. If someone is not available at that moment, do not feel bad. Remember that everybody has his or her life but will be available to you most of the time.

10) Get ready for the next pregnancy and consult your doctor for advise. Try to understand what could be the reason for your miscarriage and prepare yourself for upcoming pregnancy. Do not give up hopes.

Finally, you will understand more about yourself and smaller things that used to bother you will not bother you anymore! In all aspects of your life you will emerge more stronger and focused than before!