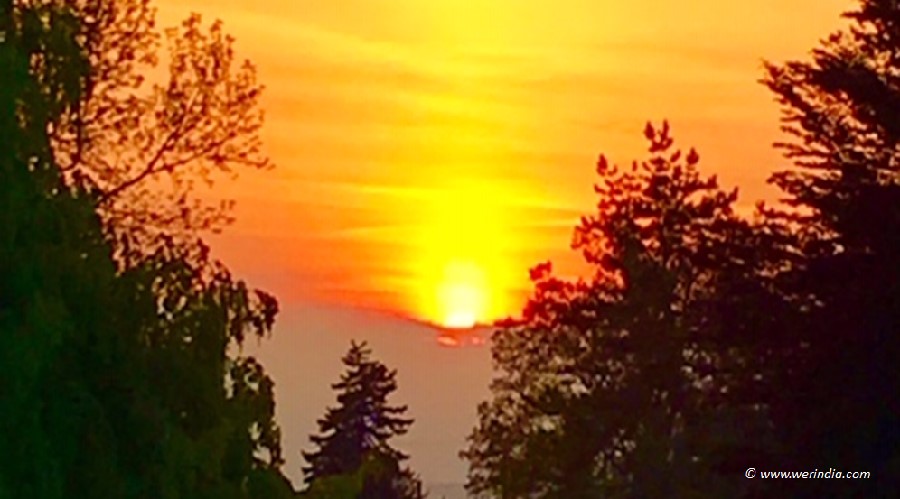 The Sun stands for knowledge, spiritual light and wisdom. Its message is that of light, unity, equality and true selflessness. These are the ideals of Karma Yoga. Hence, the sun is the greatest Karma Yogi.

Sankranti literally means “movement.” Makar Sankranti denotes neutralization of inner illusion by lightening inner glow. The day of Sankranti people worship nature and it is also symbolizes harvest season. On January 14  every year or occasionally  on 15th  January , we celebrate Makar Sankranti. It is the only Indian festival celebrated on a fixed calendared day of the solar calendar. On this day, people make offerings to the animals particularly the cow. Cow which plays a vital role in agriculture is worshipped on this harvest festival. In many villages, on this day cows are decorated with colors, bells & clothes and worshipped along with harvested crops. This signifies that nature is supreme.

On Makara Sankranthi day Surya (The Sun) is worshipped : Sankranti (Sanskrit: संक्रान्ति sankrānti) means transmigration of the Sun from one Rāshi (constellation of the zodiac in Indian astronomy) to the next. Hence, there are 12 Sankrantis in a year. Makara Sankranthi marks the transition of the Sun into Makara rashi (Capricorn) on its celestial path, and the six-month Uttarayana period. The term Uttarayana is derived from two different Sanskrit words “uttara” (North) and “ayana” (movement) thus indicating a semantic of the northward movement of the Sun on the celestial sphere. In India except Makara Sankranthi all other Indian festivals are celebrated as per the lunar calendar, which make days of celebration on the solar calendar vary every year. In India, we follow a lunar calendar; the moon goes from new moon to new moon or full moon to full moon in 29.5 days. We get 12 full moons in 354 days, making a lunar calendar year 354 days long. However, the Sun returns to the same spot in the sky every 365.25 days. This shows there is a difference of 11.25 days between the solar and lunar years. Every 2.5 years, therefore, an intercalary month (the Adhik Maas) is added to the lunar calendar to roughly synchronies the two.

Many astrological books are based upon solar calculations. The sun is the most important and the most prominent of our stars and the undisputed lord of our planetary system. The sun always comes first. First day of the week commences with Sunday (Ravi).  Science attaches great importance to the sun. The sun is the inexhaustible storehouse and the source of light and energy. Without sunlight, creatures and vegetation would cease to exist. People will lose their life sustaining vitality. Lack of nourishing substances would lead to the end of creation. This is why the sun’s existence, movements and positions in the cosmos are so important and that is why the sun earns our respect, admiration and reverence. As Makar Sankranti is one of the oldest solstice festivals and falls on the equinox, day and night on this day are believed to be equally long. Post the festival, it is officially the beginning of spring or the onset of Indian summer and the days become longer, and nights shorter.

According to Hinduism from Makar Sakranti onwards when the sun is travelling northwards, innumerable auspicious things start happening. Climate and atmosphere improve. Children born during this period are naturally progressive, well mannered, pleasant and of noble disposition. The Puranas say that on this day Sun visits the house of his son Shani, who is the owner of Makar Rashi. This day symbolizes the healthy relationship of father & son. It is responsibility of the  son to carry forward his father’s dream and the legacy of family.

Makar Sankranti is the festival of seeds and sweet – sesame, ground nut and jaggery where sesame and jaggery laddoos or chikkis are distributed among all. While eating sesame & jaggery  people say “Til-gul ghya ani gud gud bola”, meaning ‘eat these sesame seeds and jaggery and speak sweet words’.

After many months of waiting, today we have some good news about COVID-19 vaccination. Two leading companies who are working on COVID-19 vaccines- Pfizer Inc and BioNTech..

Social isolation is a big problem in the Covid-19 pandemic. Recently TikTok videos going around asking children to accept the Benadryl challenge. This is the latest social..

Often parents worry about school lunch program. However very few parents are aware of the nutrition quality of the food their child get in the school. Question..

Have you ever wondered what it would be like to have rippling muscles or sick pack abs? This is a dream that most out of shape people..

This Thanksgiving prepare and serve this delicious Butternut squash spicy noodle for dinner. Recipe has all necessary ingredients that make your dinner delicious and memorable!!

THESE REASONS MAY BE RESPONSIBLE FOR YOUR SLEEPLESS NIGHTS