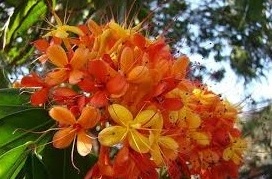 Saraca asoca (Roxb.) Wilde (the ashoka tree: “sorrow-less”) is a plant belonging to the Fabaceae. Ashoka tree is native to India where it occurs up to an altitude of 750 m, in the center and the eastern Himalayas and in the Khasi, Garo and Lushai hills.

Flowers are usually to be seen throughout the year, but it is in January and February that the profusion of orange and scarlet clusters turns the tree into an object of startling beauty. Pinned closely on to every branch and twig, these clusters consist of numerous, small, long-tubular flowers which open out into four oval lobes. Yellow when young, they become orange then crimson with age and from the effect of the sun’s rays. From a ring at the top of each tube spread several long, half-white, half-crimson, stamens which give an hairy appearance to the flower clusters. In strong contrast to these fiery blooms is the deep-green, shiny foliage. The foot-long leaves each have four, five or six pairs of long, wavy-edged, leaflets. Young leaves are soft, red and limp and remain pendent even after attaining full size.

The ashoka tree is considered sacred throughout the Indian subcontinent, especially in India, Nepal and Sri Lanka. This tree has many folkloric, religious and literary associations in the region. Highly valued as well for its handsome appearance and the color and abundance of its flowers, the ashoka tree is often found in royal palace compounds and gardens as well as close to temples throughout India.

In Hinduism the ashoka is considered a sacred tree. Not counting a multitude of local traditions connected to it, the ashoka tree is worshipped in Chaitra,[5] the first month of the Hindu calendar. It is also associated with Kamadeva, the Hindu god of love, who included an Ashoka blossom among the five flowers in his quiver. Hence, the ashoka tree is often mentioned in classical Indian religious and amorous poetry, having at least 16 different names in Sanskrit referring to the tree or its flowers. The ashoka tree is mentioned in the Ramayana in reference to the Ashoka Vatika (garden of ashoka trees) where Lord Hanuman first meets Devi Sita in Lanka. On Ashok Shasthi day, women from Bengal eat the flower buds, while Hindu ladies believe that by drinking the water in which flowers have lain, they will protect their children from worry and grief.

Medicinal use: The bark of Ashoka Tree is used for its medicinal value and it is reported to have a stimulating effect on the endometrium and ovarian tissue. The bark is useful in all cases of uterine bleeding where ergot is indicated. It is also useful in menorrhagia due to uterine fibroids, in leucorrhea and in internal bleeding.