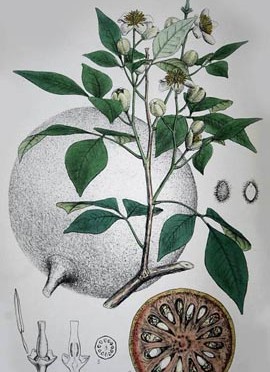 Aegle marmelos or Bael is a middle sized slender aromatic armed tree native to India.. It has since spread to throughout South-east Asia. It is a gum-bearing tree. The tree is used in several cooking preparations in India. It is also important in religious rituals and has medicinal value. In the Hindu religion, the Tri-foliate leaves typical of the Bael is seen as the 3-pronged Trident (Trisula) that Lord Shiva holds in his right hand. It is also popularly known as Bilva, Bilwa, Bel, or Beli fruit, Bengal quince, stone apple, and wood apple. In the system of Ayurveda this drug finds several and frequent therapeutic uses in different forms and recipes. They are prescribed in a number of diseases such as gastro intestinal diseases, piles, oedema, jaundice, vomiting, obesity, pediatric disorders, gynecological disorders, urinary complaints and as a rejuvenative. Besides the wide medicinal utility the plant and its certain parts (leaves and fruits) are of religious importance since the tree is regarded as one of the sacred trees of Indian heritage.