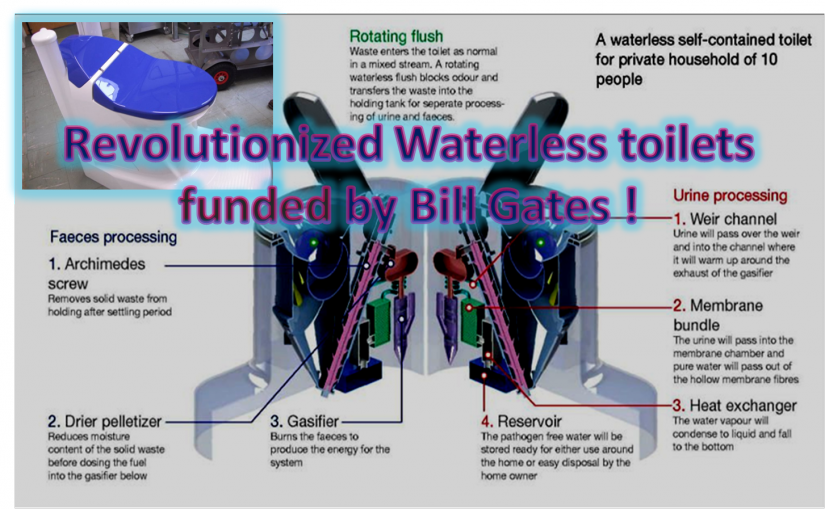 Hundreds of thousands of people die each year from poor hygiene. This innovative waterless toilet could revolutionize sanitation in third-world countries.

Bill Gates, along with his wife Melinda, founded the Bill and Melinda Gates foundation that funds worthwhile ventures that might change the world. A new innovation that received funds four years ago is the Nano Membrane Toilet, which may just revolutionize hygiene and sanitization in rural, developing countries.

Reportedly, $710,000 was initially invested in the innovation, and now the toilet has received a second boost of funds. According to developers at Cranfield University, the additional grant is “substantially more” than all previous funding. The previous amount is unknown, but it is confirmed that the money will be used to continue developing the lab prototype.

The toilet, according to Alison Parker, a lecturer in International Water and Sanitation at Cranfield Water Science Institute, “will be used in dense urban areas where a number of factors make providing good sanitation very challenging.” She added that it will be built in areas “where it would be possible to facilitate visits from a maintenance technician.” This is because the waterless innovation will need to be serviced every six months.

Because more than 2.4 billion people (there are just over 7 billion people on the planet) live in unsanitary conditions, this invention will likely save lives. Individuals who live without access to clean running water risk infections and sanitation-related diseases. With an easy-to-use toilet that doesn’t rely on water, much suffering and illness can be prevented.

How The Toilet Works:

Once a person has done their business, a rotating toilet bowl turns 270 degrees to deposit the excrement in a vat underneath. Then, a scraper tool cleans any residual waste from the unit. Solid waste will remain on the bottom, whereas liquid will rise to the top.

Nanofibers (which are extremely thin fibers arranged in bundles) are placed near the rear of the toilet to move liquid waste into a vertical tube. Specially designed bundles then condense the vapor into actual water. The H20 then flows down the tube, settling in a tank at the front of the Nano Membrane Toilet.

See the video to understand how thegrand nano-membrane toilet works:

“As for the solid waste that’s left behind, a battery-powered mechanism lifts the remaining matter out of the toilet and into a separate holding chamber. There it’s coated in a scent-suppressing wax and left to dry out.”

The liquid and solid waste will need to be removed by a lab technician every week; additionally, the toilet’s batteries will need to be checked often. Water that is procured from the unit can be used to clean homes, cook, and even bath in! And, solid excrement is transported to a thermo-processing plant that can be converted into energy which may be utilized by the community.

There’s a reason Bill and Melinda Gates invested in the invention: one toilet can serve up to 10 people and costs approximately 5 cents per day. That’s a small price to pay to save lives. According to Parker, final testing will begin this year, and then trials will begin in Africa.

One obstacle that has yet to be solved is the issue of toilet paper. Users will have no choice but to toss the paper into a nearby waste bin. However, perhaps by the time it is implemented in developing countries around the globe, an affordable, antimicrobial and biodegradable tissue will be invented.