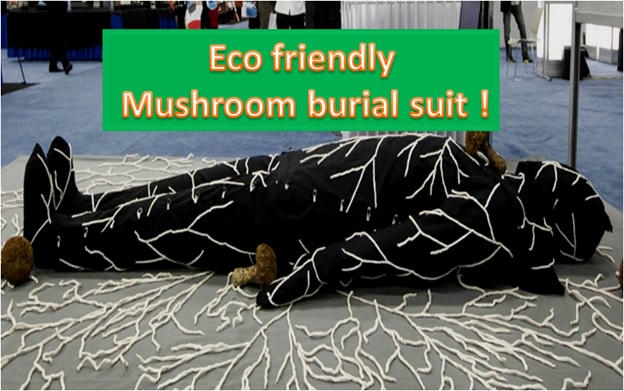 “I was inspired by the idea that mushrooms are the master decomposers of Earth and thereby the interface organisms between life and death,” Lee told Co.Exist.

Inevitably, you will die. It’s a scary reality for some, but it’s a blatant truth that must be accepted if one desires to make the most of their life. Of course, when pondering death, the conversation of what will be done with one’s remains is likely to come up.

In America, most people have two options for post-life management: cremation or burial in a casket.

As Grist relays, both have downsides. Cremation, for example, is horrid for the environment. When bodies are burned in a 1,800-degree oven, soot, carbon monoxide, and trace metals like mercury are released into the air. In addition, each cremation requires 28 gallons of fuel and releases 540 pounds of carbon dioxide into the air. According to the Funeral Consumers Alliance, 246,240 tons of carbon dioxide are released into the air due to cremation, or the equivalent of 41,040 cars.

Burial isn’t much better. While it is the more popular choice, draining the body of blood and injecting it with formaldehyde, methanol and other solvents rapidly reduces the rate of decay. As the body slowly decomposes, the toxic chemicals injected after death leach into the Earth. And, for a proper viewing and burial, your family can be left paying $7,000 – $10,000.

Because humans can do better, designers Jae Rhim Lee and Mike Ma designed the Infinity Burial Suit. The innovative burial option is essentially a body suit that is worn after death. According to the inventors, it “cleanses the body of toxins before returning to nature.” This is important because the human body is full of toxins.

The Centers for Disease Control estimates that the average human body is riddled with hundreds of toxic pollutants, including pesticides, preservatives, and heavy metals like mercury and lead. It’d be best if these weren’t leached into the soil or groundwater.

Intriguingly, mushrooms can prevent that from happening. In a 2012 TED Talk, artist and co-creator of the suit Jae Rhim Lee explained that she tested various types of mushrooms – which are known to clean up toxic environments – by feeding them her own hair, skin, and nails. The ones that best-consumed scraps of her body were selected. She used those varieties to develop a suit that basically eats the individual inside it, leaving behind clean, pollutant-free compost.

“I was inspired by the idea that mushrooms are the master decomposers of Earth and thereby the interface organisms between life and death,” Lee told Co.Exist”.

The inventor acknowledges that many people are likely to be uncomfortable with the subject, but it’s a conversation that needs to be had. In addition, she believes that considering one’s after-life options may help people come to terms with their own inevitable demise.

“We want to eat, not be eaten by, our food. But as I watch the mushrooms grow and digest my body, I imagine the Infinity Mushroom as a symbol of a new way of thinking about death and the relationship between my body and the environment.”

In fact, the first user has already been locked in. 63-year-old Dennis White, who suffers from primary progressive aphasia – a rare neurological disease, has opted to be buried in the unique suit.

He said in a documentary:

“I never thought about death until I was diagnosed, and I want to go out with a bang, like I’ve lived most of my life. What a long, strange trip it’s been.”

Reportedly, thousands are awaiting the opportunity to order theirs.