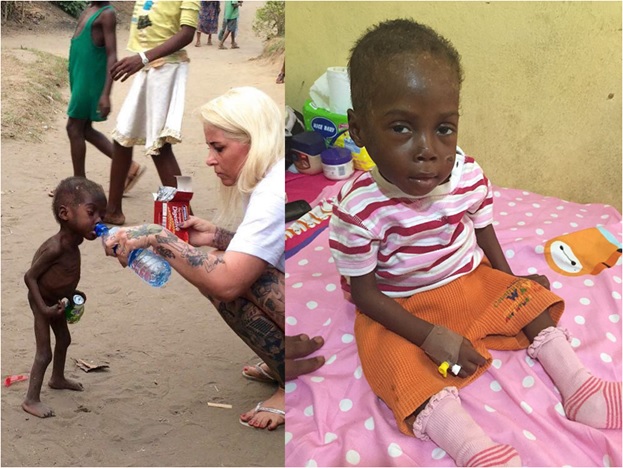 “Today, he has had powers to sit up and smiling at us. He’s a strong little boy.”

“Thousands of children are being accused of being witches and we’ve both seen torture of children, dead children and frightened children.”

On January 31st, aid worker Anja Ringgren Loven came across a sick and weakly two-year-old boy. The malnourished child was been abandoned by his Nigerian family and had been wandering the streets for eight months.

Immediately, Loven bent down and offered the young boy water and some biscuits. She then wrapped him in a blanket and took him to a hospital to receive immediate medical attention.

The baby, named Hope, had been subsisting on the scraps of food thrown to him by strangers. He was riddled with worms and had never been comforted like all children should. Why? Because his family thinks he is a witch.

Apparently, the belief is common in some villages, where families and even community members will abandon – or kill – a child touched by unwelcome ‘magic’.

Years ago, when Loven was made aware of this, she founded the organization African Children’s Aid Education and Development Foundation to save the children affected by such primitive thought. Children at the center receive medical care, food, and schooling.

“Thousands of children are being accused of being witches and we’ve both seen torture of children, dead children and frightened children,” she wrote in Danish on Facebook.

Ms. Loven updated the public, writing that Hope had been given medication to remove the worms from his belly and daily blood transfusions to give him more red blood cells.

He is now making an incredible recovery. According to Anja, his “condition is stable now. He’s taking food for himself and he responds to the medicine he gets.”

One Comment on “Story of a Little Boy Namely Hope”