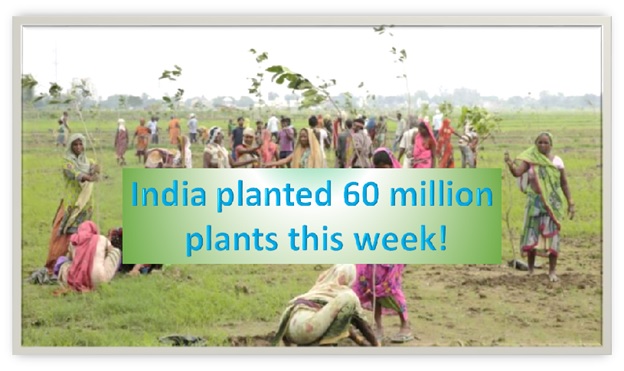 This week, activists in India accomplished the unthinkable in a mere 12 hours. In an attempt to break the previous tree-planting world record, volunteers in Madhya Pradesh, a large state in central India, worked together to plant 66 million trees in half a day.

The last world record was set in the Indian state of Uttar Pradesh in 2016 when volunteers planted 6,630,000 tree saplings between 7 am & 7 pm, as True Activist previously reported.

Though the country’s newest feat has yet to be declared by the Guinness World Records, it seems clear the will snatch the title.

The initiative was for more than setting a new world record. IFL Science reports that the Indian government has put forward $6.2 billion to increase the country’s forest cover to 95 million hectares (235 million acres) by 2030, as was outlined at the Paris Climate Change Conference. All 29 states have been encouraged to get involved, which is why the state of Madhya Pradesh went to great lengths to plant over 60 million tree saplings.

Shivraj Singh Chouhan, Chief Minister of Madhya Pradesh, tweeted on Sunday: “#MPPlants6CroreTrees is effort in accordance with Paris Accord. I am proud that Madhya Pradesh has been one of the first to initiate.”

The news is being hailed as positive, considering India is presently one of the biggest producers of carbon emissions on the planet. The country is also associated with poor air quality in urban areas, is linked to coal burning, and is known for its lack of sewage treatment operations. With initiatives, such as this one, however, perhaps its reputation will change for the better in future years.