It’s been four years since the Fukushima Nuclear Power Plant in Japan had a meltdown, and since that time, countless photos have circulated documenting the extraordinary deformities in plants and wildlife caused by the disaster.

Some of the pictures to be found include some frighteningly deformed daisies in Nasushiobara City, a location 70 miles from the facility. As you can see for yourself, these are not ‘ordinary’ daisies. A resident of Nasushiobara City tweeted out the photos on Twitter with the following caption (translated into English by Fukushima Diary):

“The right one grew up, split into 2 stems to have 2 flowers connected each other, having 4 stems of flower tied beltlike. The left one has 4 stems grew up to be tied to each other and it had the ring-shaped flower.”

As concerning as the daisies are, they hint at a larger problem. Most people are not aware that three separate meltdowns actually took place around the same time the Fukushima disaster was reported. In consequence, there are various vectors of dissemination of nuclear radiation continuing to ooze from the disaster site. As Natural Society reports, not only is contaminated water continually released into the Pacific Ocean, groundwater around Fukushima has also been adversely affected.

Because of the geological formation that the Fukushima Power Plant was constructed upon, a number of opportunities for wastewater to enter the table have been presented. Once this occurs, the contaminated water will move through conduits, such as cracks and crevices, and make its way many miles from the nuclear power plants.

In fact, it may already be happening.

The deformed flowers are not an isolated case. An Australian news source reports that locals have been reporting cases of deformed animals (including a rabbit born without ears), fruits, and vegetables, as well as other plants, ever since the Fukushima incident in 2011.

And as can be seen below, Live Science published photos of deformed butterflies in August 2012. The pale blue grass butterflies were captured in Shiroishi, Fukushima, Motomiya, Koriyama, Hirono, Iwaki, Takahagi, Mito, Tsukuba, and Tokyo, and have dented eyes, misshapen wings, and other defects. 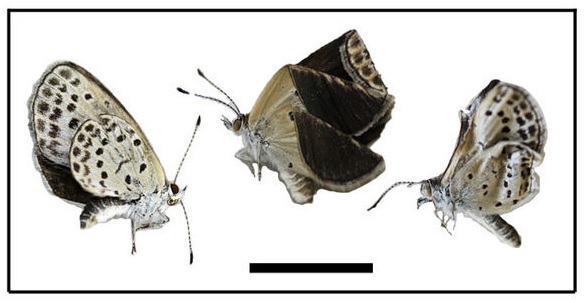 It is important to note, as International Business Times (IBTimes) reports, that the malformations in the oddly blossoming flowers are the result of hormonal imbalances. Few mainstream media sites have deduced, however, that radiation affects the production and function of plant growth hormones, even at low doses.

This news is valuable information, as the crisis unfolding in Japan does not appear to be slowing anytime soon. In January 2014, for example, radiation levels were found to be 500% higher than normal in San Francisco.

The report went on to explain that strontium-90 is a byproduct of nuclear reactors or the explosion of nuclear weapons and is considered the most dangerous component of radioactive fallout from a nuclear weapon. In fact, Strontium-90 causes cancer by damaging DNA in cells.

This news is relevant to the entire world, for no one yet knows the extent of damage caused by the power plant meltdowns.