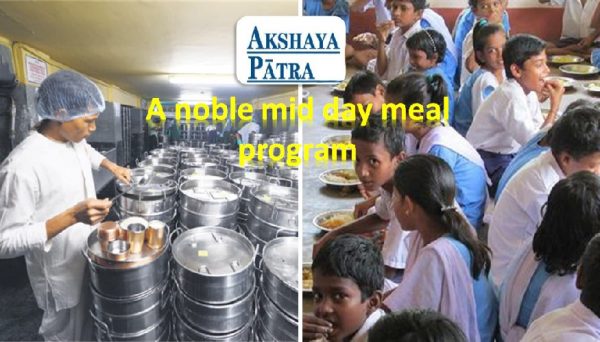 Akshaya Patra is a midday meal program that is run by ISKCON (International Society for Krishna Consciousness ) is often credited for drawing school children to studies and to cut dropouts. It is an initiative of ISKCON Bengaluru, Karnataka of India. Under Akshaya Patra scheme mid-day meals are provided for rural schools for the underprivileged children and it supports children education through healthy meal.

Akshaya Patra Foundation started feeding 1500 children in Bengaluru in the year 2000 ( June month) and as of today it has reached everyday more than 1.76 million children. So far it operating in 42 locations across 12 states of India and is conferred as the World’s largest NGO run Mid -day meal program. ISKCON’s this mission is to reach 5 million children by 2020!

The Foundation runs its operations through two kitchen models namely, Centralized kitchens – suitable for urban and semi-urban locations. It is mechanized and employ innovative technology to cook meals within few hours. Decentralized kitchen – is set up in areas which is not easily accessible and women employees cook the meals.

According to ISKCON, Akshaya patra has improve nutritional status of children and increased school enrolment and attendance of children. Rate of drop out reduced  and students are showing improved performance in studies. In addition, students attention span, academic progress improved. Harvard Business school included Akshaya Patra in their MBA curriculum for case studies on precision and time management.

This year, Akshaya Patra Foundation awarded with the prestigious Global Food Champion from BBC World Service. Chef Samin Nosrat one of he head judge of the panel said “I am really moved by getting school lunches paid for in the States and so to see it being done on such a large scale and in such an incredible way by Akshaya Patra that was a really moving and powerful thing to see. There is nothing more important to me than getting children fed. Several studies have proven that this is fundamental.”

This noble work of feeding children recently is going through a controversy. An article published in The Hindu, National daily – mentioned that school children are not happy with the food given by the organization as it lacked both onion and garlic. Many raised questions about the nutrition of mid-day meal  and some claimed food is going waste as it does not taste well. People criticized and tweeted Akshaya Patra meal.

Mohandas Pai, One of Board of the trustee of Akshya Patra shot back at the article published in The Hindu “you are lying: any data you have to make this statement”.

Who is making such accusation and meddles with children meal? The 20 year popular mid-day meal program which aims at protecting health of children and feeding poor children is questioned and abused by those who does not know the value and meaning of traditional meal. According to sources, Akshaya Patra saw an all-time high donations spree as thousands of first time donors donated liberally both in dollars and rupees for the noble cause. Those pseudo-activists who never admire and tolerate any Hindu organizations good work this time wrote a fake article that created ripples. Writer of the article visited two schools and found 3 fussy kids and claimed that food is not nutritious because it lacks garlic and onion! Writer did not provide names of the schools either. After realizing the bad impact of the article an apology came from the Director of the Hindu Magazine – according to sources!

How critical onion and garlic in our food? Not critical at all. Yes, both are nutritious and have medicinal properties. According to  Bhagavad Gita, Ayurveda and traditional food systems – both onion and garlic contain sulfur amount in higher concentration. Sulfur can distract our focus and agitate brain cells. Vedic literature says that onions and garlic are in the lower modes of nature which means are known for passion and ignorance. The foul breath and sweat that we get after consuming garlic can retain for several hours in our body. Consuming onion and garlic during breakfast or lunch time can disturb children.  This is the reason in India, food containing onion and garlic not offered to God. ISKCON is an organization of Krishna consciousness and follow vedic heritage and Hindu culture and does not include onion and garlic in Sathvik food.

Well, the attack on Akshaya Patra is conspiracy by non -Hindu groups ( also known as liberals). Akshaya patra provides nutritious meals to millions of children in India. Such great work should be appreciated and supported by all.