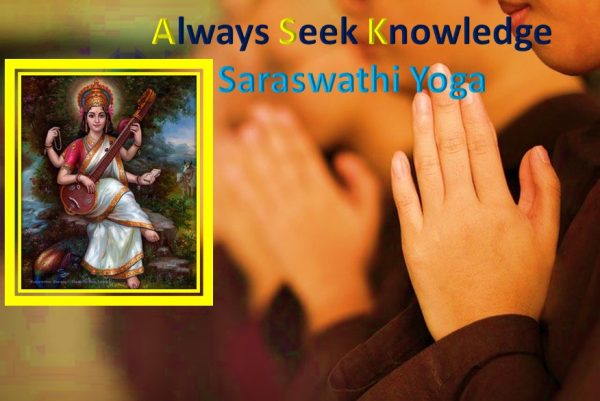 This month yogis around the world are celebrating Navrathri while seeking knowledge from their Gurus. ASK stands for Always Seek Knowledge. Yogis always seek knowledge as they advance in their life. At one point of their lives all yogis will start seeking the knowledge associated with wisdom and try to understand the purpose of living.

What they seek is, not just academic knowledge but divine knowledge. A knowledge with ego does not lead to path of wisdom.   How to acquire knowledge that does not have ego? How to balance mind and body?

Saraswathi “Essence of self” “Symbol of Knowledge”

In Hindu Vedic astrology Saraswathi Yoga is related to education, development of the intellectual human being. To get the wisdom yoga one must follow Saraswathi. What is this mean? Saraswathi means “the essence of self”.

Generally, in all the images Devi Saraswati is generally depicted with four arms wearing a white sari and seated on a white lotus. She holds a book and a rosary in two hands, while the front two hands are engaged in the playing of a lute (veena).  A swan is her vehicle and a peacock stands next to her.

What are all these gestures symbolizing?

When the inner meaning of all these symbols makes sense to us, then we may be able to acquire balance of the mind and entire system. When we understand the essence of gaining wisdom by following Saraswathi we will get Saraswathi yoga that enhances our intelligence.