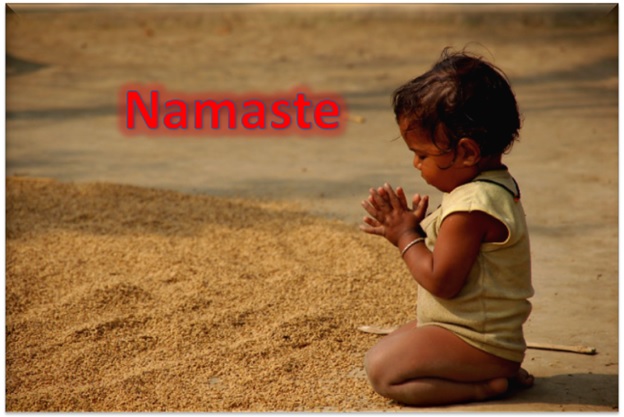 Namaste is a sacred gesture often used by Hindus, Buddhists, Sikhs, and other religions. It is a day-to-day greeting gesture of India, Nepal, Sri Lanka, Bhutan and many other countries. Namaste is also revered within meditation and yoga classes, and it is being embraced far beyond its South Asian origins.

Unfortunately, this posture of prayer is often done without conscious thought or mind-fullness. People often use this gesture without knowing the meaning of it.

Namaskar is translated from ‘namoh’ and ‘sanskar’ translating loosely into English as “I bow to godly/good qualities within you,’ .

Both Namaste and Anjali mudra are performed by pressing the palms of the hands. When we say Namaste or Namaskara -it is usually performed during greeting the other person or during pranam by pressing palms on heart chakra and bowing head. Namaste honors the light, goodness, or divine of the other person. Namaste is not the same as saying “hello”. This gesture is used in India and Nepal for both greetings and farewells while carrying a deeper and more significance than a simple hello or goodbye. The joining of the two palms can also be taken as the coming together of the right and left hemispheres of the brain representing the unification.

Mudra means seal or sign. The translation or the meaning of the phrase “Anjali Mudra” is “salutation seal” or a “greeting seal”. The word Anjali means a gesture of reverence, benediction, and salutation.

Anjali mudra honors the Sat (sa-The) Guru which would be the inner teacher – that light or divine within. Anjali Mudra most openly translates for the uninitiated into a simple symbol for reverence, benediction or celebration. However, it is secretly a request or declaration for the opening of the seal of self or heart. Anjali mudra is performed by pressing the palms of the hands together. The fingers are together with fingertips pointing up. The hands are pressed together firmly and evenly. In the most common form of anjali mudra, the hands are held at the heart chakra with thumbs resting lightly against the sternum. Anjali mudra is also known as Namaste mudra or Prayer mudra.

Krishnamacharya defines Anjali mudra as: This gesture signifies the potential for an intention to progress to greatest spiritual awakening. When done properly the palms are not flat against each other; the knuckles at the base of the fingers are bent a little, creating space between the palms and fingers of the two hands resembling a flower yet to open, symbolizing the opening of our hearts.

The benefit of practicing Anjali Mudra: It is an excellent way to induce a meditative state of awareness. Use Anjali mudra to start your meditation. One can use Anjali mudra in different way during other yoga postures to connect body and soul during yoga practice. Not only during the opening and closing of the class but it can also be applied to some other postures. Some of the yoga postures where one can use this mudra are: anjaneyasana (lunge) – with arms overhead, hanumanasana (monkey pose), malasana (garland pose), matsyasana (fish pose), prasarita padottanasana (wide-legged forward bend) -, tadasana/samasthiti (mountain pose) , Urdhva Hastasana (upward salute/extended mountain pose), virabhadrasana I (warrior I), vrksasana (tree pose).

In fact, Hindu God Hanuman’s statues are mostly exhibits God in Anjali mudra. Lord Hanuman himself is a devotee of Lord Sri Ram. One can see in Hindu temples Hanuman’s statues with palms together, closed eyes in a prayer pose with humbleness, dedication and bhakti. By doing namaskara we respect not only others but ourselves too.