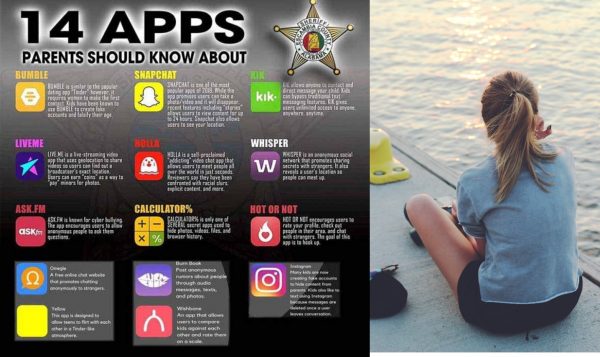 There are many Apps that attract kids and put them into dangerous situations. Many Apps are not safe for kids to use and parents must make note of these Apps. Recently Fairview Park Auxillary Police association has warned parents about 14 such apps that could put kids in danger and harm them.

Your child may insist on downloading these below apps. Before installing any such apps in your child’s phone read and thoroughly understand what these apps are for. These apps can expose your child to not just bullying and unwanted sexual messages also give information about child’s location.

These apps can be downloaded anywhere in the world and list of 14 apps given by Fairview Park Auxiliary to help protect your children.

Before installing any apps on children phone, parents need to give attention to following critical points.

14 apps that could put your kids in danger

BUMBLE is similar to the popular dating app “Tinder.” However, it requires women to make the first contact. Kids have been known to use Bumble to create fake accounts and falsify their age.

LIVE.ME is a live-streaming video app that uses geolocation to share videos, so users can find out a broadcaster’s exact location. Users can earn “coins” as a way to “pay” minors for photos.

ASK.FM is known for cyber bullying. The app encourages users to allow anonymous people to ask them questions. Ask an anonymous question and get an answer. This app has been linked to the most severe forms of Cyber bullying.

SNAPCHAT is one of the most popular apps of 2018. While the app promises users can take a photo/video and it will disappear, recent features including “stories” allows users to view content for up to 24 hours. Snapchat also allows users to see your location.

HOLLA is a self-proclaimed “addicting” video chat app that allows users to meet people all over the world in just seconds. Reviewers say they have been confronted with racial slurs, explicit content and more.

CALCULATOR% is only one of several secret apps used to hide photos, videos, files and browser history. This app looks like a calculator but functions like a secret photo vault. There are other apps just like this that have an icon that looks normal, but it is a hidden icon or some other app, etc.

KIK allows anyone to contact and direct message your child. Kids can bypass traditional text messaging features. KIK gives users unlimited access to anyone, anywhere, anytime. Keep in mind this app has built-in apps and web content that would be filtered on a home computer.

HOT OR NOT encourages users to rate your profile, check out people in their area and chat with strangers. The goal of this app is to hook up.

OMEGLE is a free online chat website that promotes chatting anonymously to strangers.

YELLOW is an app designed to allow teens to flirt with each other in a Tinder-like atmosphere.

WISHBONE is an app that allows users to compare kids against each other and rate them on a scale.

Note: These are only a few examples of apps that you should be aware about. keep in mind when looking at apps… look to consider whether they have messaging features in them or not.

Checking your child’s phone and apps is the best defense against potential predators, who have become increasingly tricky when targeting victims.