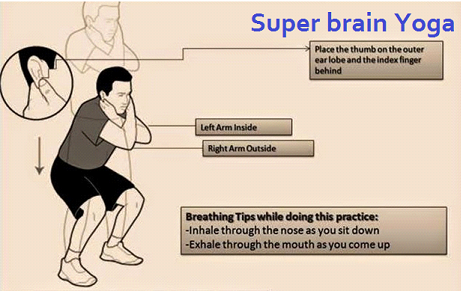 Super Brain Yoga is an ancient yogic exercise. It is a simple yet powerful technique used to fuel and sustain a healthy brain in order to enhance the capability of the brain to retain and process information.

Originally the great Rishis (saints) of India developed this technique to increase the intelligence of the public using the principle of ear acupuncture points. Thoppu Karanam is the common name for this posture (Tamil launguage). It means to hold the ears. From ancient times, this practice has been evident in the Indian Culture, where people practice this in front of the image of the Lord Ganapathy (a symbolic representation of supreme energy in the form of an elephant which actually signifies wisdom). This posture is connected with the brain. “Ga” representing Intelligence, “Na” representing Wisdom and “Pathy” representing – Master, so ideally meaning of Ganapathy means Master of Wisdom and Intelligence. It is said that this practice is a request to stimulate the wisdom and intelligence. It is also said that the practice has been evident in the ancient Gurukula Systems, where the teachers or Gurus asked their pupils to practice this technique in order to stimulate and energize the brain and its functions. In fact, the practice of ear piercing too has its real reasons being the stimulation of the pituitary and pineal glands, due to the effect of the pressure in the ear lobes.

Today this practice has been re invented by some enthusiasts and is promoted in many parts of the world as “Super Brain Yoga” and more and more people are taking to it. Dr. Eric Robins, a medical doctor in Los Angeles, calls it “a fast, simple, drug-free method of increasing mental energy” and prescribes it for his patients. He speaks of one student who raised ­­­his grades from C’s to A’s in the space of one semester.

Some of the benefits of Super brain Yoga are:

Author: Sumana Rao | Posted on: September 29, 2015
TAGS: brain yogaindian cultureLord Ganapathy
« Previous Article Next Article »
« Snoring : How to stop snoring for better health What Do You Know About Shingles? »