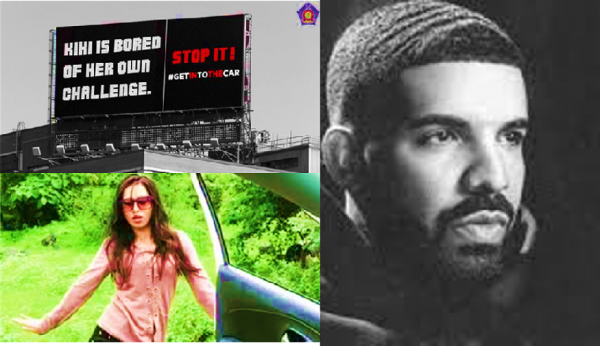 After Mannequin challenge, people are accepting a new viral challenge In My Feelings challenge. This popular dance craze has been sweeping internet and people are going crazy about the challenge. Many film stars and celebrities are also accepting the challenge and sharing their videos. In my feelings is a hit song of Drake.

This challenge started when comedian of the Shiggy show Shiggy shared video of himself dancing to the tune and called it “doing the shiggy”. The catchy tune is in Drake’s voice is for   “Kiki, do you love me? Are you riding? Say you’ll never ever leave from beside me.”  and heart gesture that he uses in driving motion with his arms for “are you riding” line made fans go crazy!

Since the original video went on viral, in couple of weeks on all social media including YouTube more than 400,000 posts are posted with hashtag #InMyFeelingsChallenge. People are mimicking the moves and trying to dance where ever they are. Celebrities Will Smith to singer Ciara has accepted challenge and people thought it is fun.

Is jumping out of the moving vehicles to music beat and putting oneself and others danger is fun?

Absolutely not! This was supposed to be a innocent challenge just for simple dance moves. But this challenge is turning out be dangerous as thousands of people started recording themselves while hopping into their moving cars and performing dance on road side, in traffic and on highways. Such risky dance been viewed by millions on YouTube and Instagram. It has become a dangerous trend now.

Dancing is good for health. But risking life by jumping out of moving vehicle to show you your moves and prove yourself is unhealthy!

Will Smith literally took challenge to new level by climbing top of bridge ! If he can do why can’t us?  – that is the mentally of fans. But, the deadly stunt is hurting many. Everyday there are reports about people accepting challenge and trying to prove themselves is putting many lives in danger. Many people got hurt and recently in Iowa a girl while stepping out of the car to show dance move hit by the door and suffered skull fractur, blood clots in ear and bleeding in the brain. Another man in Florida was hit by a car doing Drake’s moves.  There are growing subset of videos that are also showing failed attempts of kiki challenge. Cars hitting and crashing poles, getting hit by other vehicles, people falling and vehicles almost running over them.

Do you know? It is not just humans. Even cows, camels, goats and dogs have become the unlikely stars of the #kikichallenge videos. Animals lives are also put on danger.

In India, Jaipur police displayed a billboard with a message: “Kiki Kills” and it is really thought provoking for everybody who is aware of the challenge. In Gujrat an elderly woman danced on the road and police in Bengaluru posted a warning “If you dance for #kikichallenge on the roads, we are sure of making you dance behind the bars”.  Police warning also read “Kiki challenge may get you a kick of law not kick of dance”

In Egypt, people who found doing the challenge and obstructing traffic jailed for up one year. In Abu Dhabi three social media personalities were arrested for endangering others during dance performance. In many cities and countries the  #kikichallenge is banned! According to police in many countries, distraction in any mode is dangerous and it can be deadly. It is like texting and driving. Focusing on safety and road is important for everybody. Otherwise you will risk life of others who are on road for various tasks.

People may think nothing goes wrong when you step out and show small dance moves from moving vehicle as it takes few seconds to dance. But participating in such act can be fatal. If the challenge is healthy and do not impose to risk to anybody including the person, then accept the challenge.

Do not accept challenges that can be life threatening. All of us have responsibilities and let our behavior and action reflect that. Focus on those challenges that are healthy, worthwhile (in participating) and that do good to you and others.