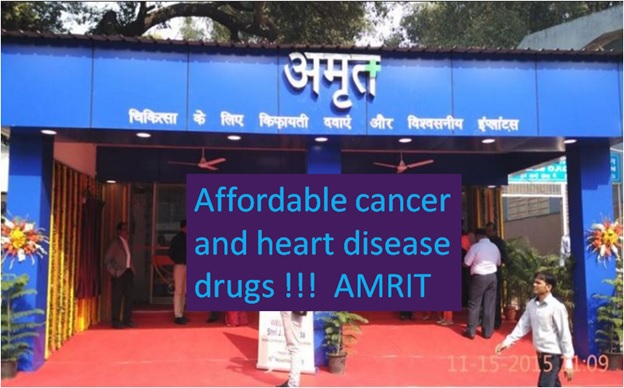 A new scheme helps all Indian citizens to get better treatment for cancer and cardiovascular disease. The pharmacy AMRIT – Affordable Medicines and Reliable Implants for Treatment – will sell 202 drugs to cure cancer and cardiovascular diseases with prices much lower than that in the open market. The government will also provide 148 cardiac implants that will be sold at 50-60 per cent discount at the pharmacy. Under the AMRIT scheme, drugs will be sold at a fraction of the market price. Docetaxel 120mg, used for chemotherapy cycle, will be priced at Rs 888.75 (93 per cent rebate for one cycle), while the MRP of the injection is Rs 13,440. Similarly, Carboplatin 450 mg would be sold at Rs 1,316.25 while its MRP is Rs 2,561.57.

“Under the AMRIT programme, we want to give medicines at an affordable cost. We have identified 202 drugs of cancer and cardio-vascular diseases where the price is going to reduced on an average by 60 to 90 percent. In the same way, 148 cardiac implants will be given from the centre and sold here and their cost will be reduced by 50 to 60 percent,” Union Health Minister JP Nadda, India.

The government’s move comes amid statistics that peg Indians diagnosed with cancer at 700,000 every year. About 2.8 million people have cancer at any point of time and half a million die of the disease each year. The annual figure of women being diagnosed with breast cancer in India is 145,000, according to the World Health Organization. A significant number of patients (nearly over 50 per cent) stop visiting hospitals after two or three cycles of chemotherapy due to unaffordable costs.

With the aim to reduce the expenditure incurred by patients on treatment of cancer and heart diseases, first Affordable Medicines and Reliable Implants for Treatment (AMRIT) outlet at All India Institute Of Medical Sciences AIIMS was opened on Sunday. It will be run by HLL Lifecare. To begin with, HLL will dispense 195 oncology drugs, 186 cardiovascular drugs and 148 cardiac implants through AMRIT pharmacy. According to HLL chairman and managing director Dr M Ayyappan- Initially, the pharmacy will retail cancer drugs. By end of November month, it will commence the dispensing of cardiovascular drugs and implants in line with cancer drugs. Based on the outcome of the AIIMS outlet, this initiative will be taken to other central government hospitals and Regional Cancer Centres.