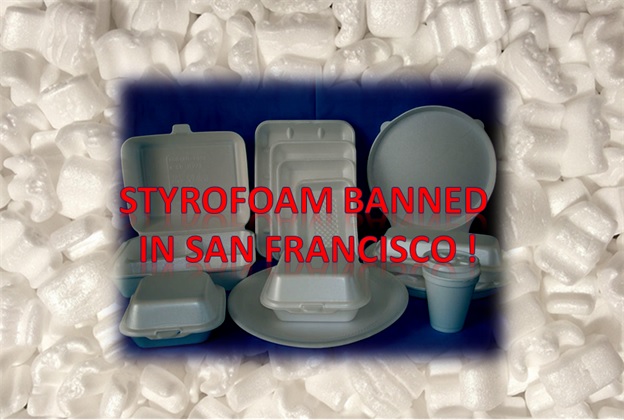 (Styrofoam is a polystyrene material, which is not biodegradable. It is one of the widespread material used for packaging, eating and in other forms -is banned from San Francisco! The ban applies to polystyrene food packaging, packing peanuts, to-go containers, coffee cups and pool toys, among other things. For most products, the ban will take effect Jan. 1, 2017. For meat and fish trays, it becomes effective July 1, 2017. The bill’s sponsors argued that such foam products, which are not biodegradable, pollute waterways and can harm animal life. Many cities and counties have outlawed polystyrene foam (i.e. Taiwan, Portland, OR, and Orange County, CA). Styrene is classified as a possible human carcinogen by the EPA and by the International Agency for Research on Cancer (IARC). Chronic exposure affects the central nervous system showing symptoms such as depression, headache, fatigue, and weakness, and can cause minor effects on kidney function and blood.  – Healthylife.werindia.com )

By the year 2017, it will be illegal for polystyrene – the trademarked brand name Styrofoam – to be sold in the city of San Francisco.

This news is a result of the San Francisco County Board of Supervisors unanimously passing a ban on the packaging material. As of January 1st, it will be illegal for polystyrene food packaging, packing peanuts, takeaway containers, coffee cups, foam dock floating, mooring buoys, and pool toys to be sold in the city. According to Science Alert, this is the most extensive ban placed on the material in the U.S. to date.

Most locals are thrilled with the news. As you may know, polystyrene is the petroleum-based plastic foam that’s used to make a range of disposable items, and it’s commonly thrown away after one use. Similar to plastic, it takes years to decompose and can leach harmful chemicals into the environment as well as kill wildlife when it is ingested. It seems it’s best if the packaging material isn’t sold in the first place, which is why San Francisco passed the ban.

“The main challenge posed by Styrofoam is that it breaks into tiny little pieces, especially outside in the sun when it photodegrades. It looks more and more like food and makes them feel full, and really, they’re malnourished and they can die from that condition.”

It should be noted that styrofoam insulation products won’t be banned. But, as of July 1st, 2017, it will be illegal to sell polystyrene fish and meat trays. Some critics have complained that the ban will hurt supermarkets that use polystyrene trays by not giving them enough time to switch to acceptable packaging. In effect, the Board of Supervisors granted grocers a six-month waiver to find eco-friendly packaging for meats and fish.

All these steps have been taken to help San Francisco meet its goal of becoming a waste-free city by 2020.

Board of Supervisors President London Breed wrote on her Facebook page shortly after the vote:

“I just passed the toughest anti-Styrofoam law in the country, and we did it unanimously. This is a huge step for our environment and health. San Francisco is on our way to leading the country on environmental policy—again!”

In 2007, San Francisco passed a ban on the sale of polystyrene takeaway containers, mainly due to environmental concerns. This latest initiative, however, takes it even further. Though New York banned the sale of styrofoam cups, it was quickly overturned when the critics deemed the ban to be “neither environmentally effective or economically feasible.” Activist hope that San Francisco maintains its latest decision.

A few chemical companies have spoken out against the ban, primarily stating that styrofoam is more eco-friendly than some biodegradable options, but as Tim Shestek, the council’s senior director, stated: “All packaging leaves an environmental footprint.”

Is this the right move for the city of San Francisco? Please comment below and share this news!