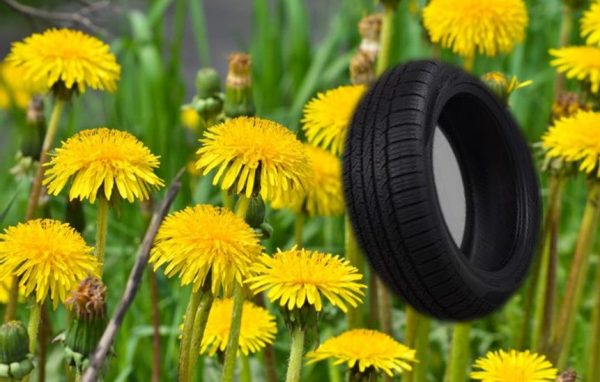 Commonly considered as weed with beautiful yellow flowers Dandelion is gaining importance for all good reasons. Before you throw Dandelion from your yard, think twice.

Why Dandelion is gaining importance?

Dandelion is known for its medicinal properties. Its root and leaves are used for different home remedies. Leaves are edible and can be added in salad. With these, it is adding another feather to its cap!

Globally many companies are searching for ways to be more environmentally friendly and looking for sustainable, regenerative materials for manufacturing of various products. Rubber industry is looking for plants that can be used in rubber production. Rubber plants Hevea brasiliensis from Brazil were the most cultivated plant around the globe for rubber production.

Do you know? Today fossil fuels are major source for rubber. Overall, 65% of rubber consumed globally is derived from fossil fuels. This is cheaper and more hardwearing than its natural counterpart. The advantage of natural rubber is it disperses heat better and has better grip. This is the reason tires are made with a mix of both.

During the second world war because of the growing demand, US, UK, USSR and Germany were using Dandelions for rubber manufacturing! It means, the technology of rubber manufacturing using Dandelion is not new to the world. It was originally developed by then USSR to become self sufficient nation.  After searching for hundreds of various types of plant specimen, Soviet Union picked up Dandelions growing in Kazakhstan for rubber production. Russian dandelion, namely Taraxacum koksaghyz, supplied 30% of the USSR’s rubber by 1941.

After second world war, rubber plant gained more importance due to low cost production and Dandelion moved away from the picture.

Growing Hevea is another major reason for deforestation in Brazil.  Leaves of rubber plants are vulnerable to fungal blight disease in South America. This is making rubber industry look for an alternative to rubber plant as they are nervous to depend on single plant that has very little genetic diversity.

Dandelion is back in action!

Dandelion plant grows easily everywhere, anywhere. These plants do not require any additional supply of food or care. Their seeds easily disperse and grow well even in polluted areas! The Russian Dandelion can be grown in poor soil and it does have to grow using agriculture methods. Apollo which was part of EU funded DRIVE4EU consortium cultivated Dandelion in Belgium, Netherlands, and Kazakhstan. Dandelion for this project was also cultivated in Sweden, US, and Germany. In US and Canada, Dandelion is very common and present everywhere. Taking advantage of this character of Dandelion, Taraxagum research team has come up with idea of producing best quality rubber. Dandelion tires also proved to be even better than those that were manufactured using Hevea, the natural rubber. It also blends with synthetic rubber well.

There is still concern about another problem, disposal of the used, degraded rubber as micro particles of rubber settles in water sources.

As mentioned, Dandelions are easily growing weeds and are very critical for maintaining food supply for bees and dandelion root coffee (herbal tea) is popular food amongst many. Now extracting good quality rubber for rubber industry makes Dandelion presence more important for the environment. Instead of going on destroying the forest around us to plant rubber tree, plants like Dandelion that grow naturally bring promise and hope for the environment.