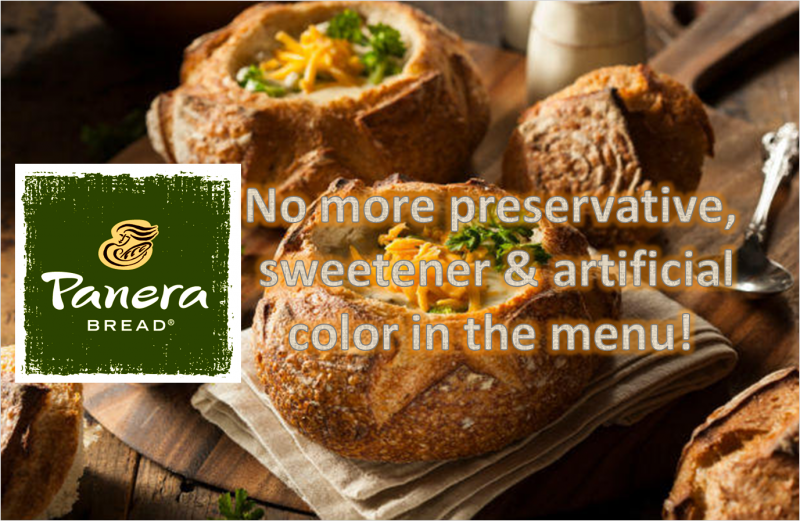 (Good news for all Parents and Panera fans – Panera Bread – one of the popular US restaurant chain featuring bakery products, sandwiches, and salads is adopting menu free of preservatives, sweeteners and artificial colors. Parents need not to worry about the alien words in the menu, instead they can happily focus on menu items that is familiar and free of junk stuffs! –Healthylife.werindia.com )

Panera Bread kicked the year off right by releasing its new menu in the U.S. which is now 100% free of artificial flavors, preservatives, sweeteners, and colors from artificial sources. Additives that were eliminated include FD&C colors, sodium benzoate, sodium nitrate and sodium phosphate. The monumental news was announced in a video (below) by Ron Shaich, the Founder, Chairman, and CEO of the restaurant.

The restaurant prides itself on being one of the first establishments in the U.S. to meet consumers’ demands for higher quality food at affordable prices. In 2010, Panera became the first national chain to post calories counts on menus, inspiring other food businesses to follow suit. 2015 is when the restaurant announced potential provisions to its menu. Since then, the restaurant has added options that are lower in calories, switched its chicken to be free of antibiotics, and began sourcing luncheon meats in both their restaurant and grocery store foods that are free of nitrates.

Less than one month into 2017, Panera can now boast that it has reached its goal of becoming a “no artificial” restaurant by changing recipes and eliminating 122 ingredients that many nutritionists and picky eaters declare are less than ideal for health. Now that all ingredients one might not be able to pronounce have been nixed from the chain’s menu, it is deemed to be a “clean” eatery.

In the video below, the CEO of Panera explains that one of the company’s most basic commitments is to “actually be part of fixing a broken food system in this country.” With more than 1/3 of the U.S. population obese and 1/3 overweight, this is an initiative we can get behind.

Watch the video below:

Article by: Amanda Froelich as published in http://www.trueactivist.com/panera-adopts-menu-free-of-preservatives-sweeteners-and-artificial-colors/