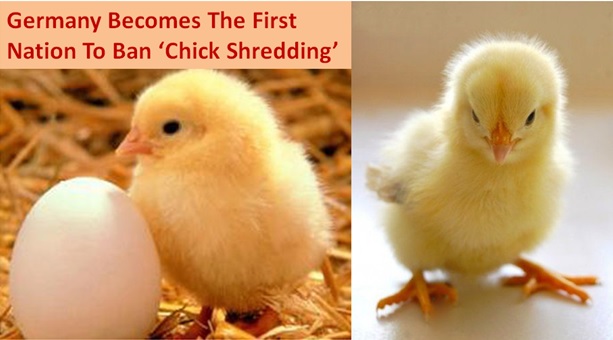 By  Amanda Froelich at www.trueactivist.com

Newly developed technology will determine the sex of each fertilized egg before the chick inside develops – enabling the removal of all male-identified eggs from the hatchery. This will eliminate the industry’s need to heartlessly grind male chicks once hatched.

Did you know? Every year, millions of tiny male chicks are ground up alive or suffocated because they don’t lay eggs. The little guys aren’t considered ‘commercially viable’ to even be raised for meat and, therefore, are brutally killed shortly after hatching.

It’s an unfortunate side effect of the commercial egg industry which few producers are open to talking about. One can understand why, as half of all chicks born into the egg industry are male – creating an enormous ethical issue.

If consumers were made aware of ‘chick grinding,’ which is commonplace in most egg factories, producers and egg companies would have a public relations catastrophe to deal with.

For this reason, it’s been up to animal rights activists to raise awareness about the brutal conditions chickens often live in when raised conventionally.

Thankfully, efforts have paid off. As Animals Australia reports, scientists and animal rights campaigners have teamed up in Germany to come up with an alternative option to the mass-slaughter of the 45 million male chicks born into the country’s egg industry each year.

The newly developed technology will determine the sex of each fertilized egg before the chick inside develops – enabling the removal of all male-identified eggs from the hatchery. This will leave only the female eggs to hatch, which is much more ethically sound.

Christian Schmidt, Germany’s Agricultural Minister, has advised that ‘chick shredding’ be phased out completely by 2017 – making Germany the first country in the world to stop the practice.

Hopefully, this progressive step forward will inspire other countries to follow suit.  The slaughter of male chicks has, unfortunately, become standard across all types of commercial egg farming – free range included. That means major effort and reform of thought will have to sweep through the industry, but it is possible… Germany is proof of that!

Why Germany took this step? See the video

Egg Industry grinds millions of chicks alive (Disclaimer: Content of this video is hurtful & if you are not strong enough please do not watch the video)

Author: HealthyLife | Posted on: November 15, 2015
TAGS: chick shreddinggermanyworld
« Previous Article Next Article »
« 85% Of Feminine Products Are Contaminated With Cancer-Causing Glyphosate San Francisco is the First City To Ban The Sale Of Plastic Bottles »