How fertilizers are killing Indian crops? 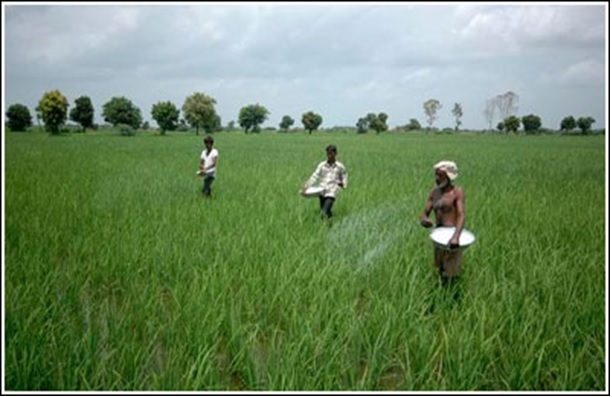 This article was first appeared in the year 2009 in  infochangeindia.org, written by  Ashish Kothari. Only abstract of the article is presented here. This article is still relevant because not much improvement or change has happened in fertilizers use in agriculture.

Studies conducted by two Indian and a Spanish scientist puts together evidence of how counterproductive fertilizers have become; the havoc they are playing with India’s soils; and the alternatives that already exist. Dr B C Roy and Professor G N Chattopadhyay of Viswa Bharti’s Institute of Agriculture, and Dr Reyes Tirado of the University of Exeter, have authored ‘Subsidising Food Crisis: Synthetic Fertilizers Lead to Poor Soil and Less Food’, produced by the environmental NGO Greenpeace India. The authors of ‘Subsidising Food Crisis’ also highlight the inequities involved in the subsidy.

Over one-third of the subsidy goes to the fertilizer industry; the major farmer beneficiaries are those in richer irrigated areas compared to poorer, dry land areas.

One of India’s biggest economic burdens is the huge government subsidy on synthetic fertilisers. From about Rs 60 crore in 1976-77, it catapulted to around Rs 120,000 crore in 2008-09. Everyone acknowledges this burden, but it is justified in the name of increased agricultural productivity.

The subsidy encourages widespread fertiliser use, so much so that from only 0.07 million tonnes (Mt) in 1950-51, consumption in India is now well over 23 Mt!

What is becoming increasingly clear, however, is that this subsidy is not only a financial millstone around our neck, it is also slowly killing off agriculture. This may sound paradoxical, considering that fertilisers have always been revered as an important pillar of the Green Revolution, and that any talk of doing away with the subsidy amounts to political hara-kiri, given the fear (very real) of a massive farmer backlash.

And yet, more and more farmers themselves are questioning the policy, having experienced a host of problems with unrestricted and sustained fertiliser use. Many agricultural scientists too are voicing doubts over whether fertilizers play a useful role any more… even if they did at some point. Is it time, they say, to consider alternatives that may be more feasible and sustainable from ecological, financial, and other perspectives?