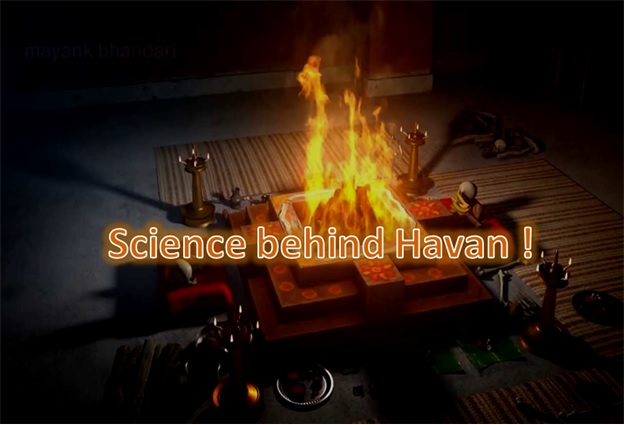 It is important for everybody to be happy and healthy, it is very important to lead a life with peaceful mind. In addition, it is very important to have clean environment in terms of clean water and clean air. Population increase, technology, traffic, and pollution and many more things are adding to global warming. There is a tension, havoc around the world. Is there a way we can purify our environment where we live and be happy?

Havan or Yajna, which is one of the ancient ways of purifying the air while worshipping God, has been scientifically proven to be the best method to absorb negative particles from the environment. What is Havan or Yajana? It is a sacred way of worshipping God in which a sacred fire is lit and Sanskrit mantras are recited.  Some people think that it is just worshiping fire and it is not.  It is more than worshipping the fire. It is an ancient ritual performed for the purification and peace of the earth and environment.  It is a selfless act of scholars by means of prayers, who pray for the purification of environment by means of worshipping nature (and God).

The Havan or Yajna is not considered as worship of visible fire. It is only a symbolic act, Havan symbolizes the three D’s—Discipline, Devotion and Dedication.

Science has proven that the havan fumes can kill unwanted bacteria present around and brings pure air in the environment. An artical published in Acrobiolagia and Earth Environment talks about the reduction in fungal spores in presence of havan by killing Aspergillus, Penicillium, Curvuleria and cladosporium etc.

What materials are used in havan?

Havan is performed in Hindu religions in a systematic way that has its own meaning and significance. There are many steps involved in Havan. Offerings and prayers will happen through Agni (fire God). Materials like – Cow ghee, Mango wood or Jackfruit wood, Sandalwood pieces, Camphor, Grass – either darbe or Cymbopogon, Coconut and copra, Red sandalwood, Agar sticks, Essences, Dhoop sticks, Myrr or guggal, Navadhanya and other auspicious materials. Use of certain depends on the type of rituals and offerings people perform. Havan mainly contains cow ghee and plant products or herbs.

What effect havan has on environment?

An article published in Science Direct, Ethnopharmacology states that Burning wood and medicinal herb which used during ‘havan’, effectively reduce pathogens in the air” A study carried out by a team of scientists at National Botanical Research Institute (NBRI) in India, has claimed that smoke emitted during havans reduces airborne bacteria to a large extent, minimizing possibility of infectious diseases.

Various gasses produced during Havana decompose the poisonous gasses liberating free oxygen and other useful products acting like disinfectants. Performance of daily Yajna or Havan has many benefits. This is an activity with multiple benefits. We not only purify the air but also remove the impurities of our mind and body.

• When the havan is performed the air touches the fire, gets purified and becomes lighter in nature. This light air goes up and replaces the cold/ the impure air and this process continues and the air keep getting purified till the ritual is being performed.

• Studies and research conducted shows that the main ingredient in havan is mango wood which when burnt releases formic aldehyde, a gas which kills harmful bacterias thus purifies the atmosphere.

• Interestingly, the jaggery burnt in the havan also releases the formic aldehyde gas. According to studies conducted, typhoid causing germs gets killed in presence of havan fumes.

• Cow ghee plays a significance role in havan. Ghee has been referred as an antidote to the poison in Vedas. Its fragrance purifies the physical atmosphere. Ghee when burnt in fire goes up in the atmosphere and attaches itself to the particles in the atmosphere. It comes back to the earth during rain and thus nourishes the vegetation. According to Russian Scientist Dr. Shirowic cow’s ghee added to the fire will decreases the effect of radiation in the atmosphere to a great extent!

• As mentioned in Samaveda, sweets like honey and jaggery, ghee and dry fruits, aromatic herbs like cardamom cinnamon, clove, rose petals, guggal (myrrh) and camphor when burnt releases fragrances that removes the unwanted odor from the earth and purifies the air.

• The aromatic oils and herbs that are medicinal are offered to the sacred fire burn to create chemical substances such as ketones and aldehydes, which produce disinfectants like Formaldehyde. It is a kind of fumigation process, which cleanses the air of harmful germs.

• Inhaling the fumes of havan which contains herbal materials, from distance induces secretions from certain glands related to wind pipe that fills our mind and heart with relaxation. It is similar to use of essential oils or herbal oils effect. As described in Rigvedas , saints used to perform agnihotra-yagnas to purify the environment by sublimating the havan samgri in fire. The man has not realized the significance of the other living world the plant kingdom around him that how important it is for his survival. It is time to wake up and stop ruining the forests and nature.

As per Vedic scholars, the combination of the powerful energy of the fire and the Sanskrit mantras creates extremely auspicious and purifying vibrations that are beneficial to all who attend the havan or homa. The smoke/ fumes arises brings peace in the mind, acts positively on body and helps in purification of the environment. There is no yoga or yajna greater than spontaneous, pure, sattvic giving. According to universal law no one can gain anything without giving: “give and it shall be given unto you.” Give something good (in the form of havan) to the environment and enjoy the benefit of purified water, air and nature.